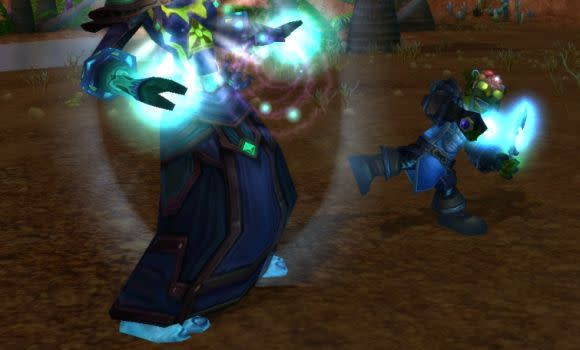 Word on the street is that the old rogue finally hit the dirt. Nobody is exactly sure how it happened. Did he get a little too cavalier in a duel with Rossi and eat the wrong end of a two-handed Overpower? Did Frostheim land a lucky Flare/Freezing Trap combo after seeing him slinking in the shadows? Did some hotshot mage get lucky and land the ultimate Shatter bomb while his cooldowns were recharging?

Or did he simply Vanish into thin air? Did anyone actually see the body? Were they able to identify his daggers by comparing the multitude of scrapes and scars? Was there a trace left behind to prove he was ever really here? That's the funny thing about rogues: you never know when they're dead, or just in repose.

Rogue is... cloaked in the shadows

Stealth is the defining characteristic of the rogue class. Stealth brings with it the element of surprise. Rogues are designed to control a fight's tempo, starting with the very first blow. Picking out the perfect opportunity to strike is a tactical advantage that cannot be overstated. We use Stealth to both initiate and to retreat. The shadows are a boon to our offense and our defense. We are natural assassins.

Rogues add an element of uncertainty to every encounter. Whether a rogue is sneaking through a dungeon or lurking in his opponent's flag room, they're the wildcard that can't be predicted. A warrior always has to use the front door, while a rogue can sneak in the back, through a window, or even down the chimney. A rogue could be behind you right now, and you'd never know.

Rogue is... blood on your daggers

Rogues aren't satisfied sitting in the back and calling the shots. Rogues need to be fighting in the fray: daggers stabbing, swords slicing, axes hewing, maces swinging. A rogue's work isn't done until every last enemy in the room is dead. We're the only pure melee DPS class, which means we have the simplest role in the world: hit the bad guy until it dies.

While the directive is simple, that's not to say that our execution is. We're poisoning our targets, corroding their armor, dismantling their weapons, attacking their weak points, and disrupting their flow. The rogue experience is defined by its elegance and punctuated by its brutality. Bringing the entire rogue arsenal to bear on a single foe is an awesome experience, at least from the rogue's side. Is there anything a combatant fears more than a skilled rogue, with an entire set of tools that are specifically designed to destroy their target?

Rogues are the best DPS class, because we have to be. There's simply no other way for the rogue class to function without aiming at the top of the damage meters. We can't tank, we can't heal. We're only good at one thing, which means that our every effort is poured into a single purpose. A rogue's value starts and ends with one word: damage. If you're not dealing damage, you're not worth your spot in the group. Our currency is damage, and our goal is to be as greedy as goblins.

Rogues are the ultimate killing machine. Every ability and cooldown is designed to overpower and overwhelm our opponents. We have every possible mechanic at our disposal, from movement boosts to stuns, from slows to incapacitation, from damage to damage reduction. Rogues are like Batman: we always have the right tool for the job. Rogues have been called the best-designed class, and our mechanics are as old as the game itself. You can't improve on perfection.

As you might have heard, I am hanging up my daggers. Well, the ones I write with, at least. I'll still be playing my rogue and ganking everyone with a red name over their head, I just won't be writing about it here. Due to some major (positive) changes in my personal life, I am handing off the column to an aspiring young rogue (that could be you!), effective immediately.

I am thankful for everyone that has read and commented on Encrypted Text over the past five years that I have been maintaining the column. It has been my honor to serve the rogue community. Thank you for all of your kind emails, comments, and questions. Thank you for your fair criticisms, engaging debates, and honest discussions.