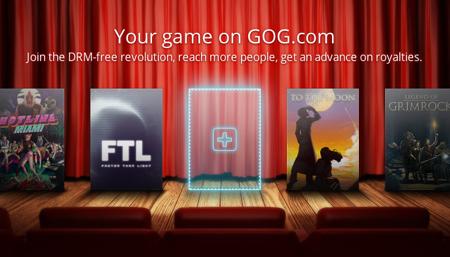 If you're an indie game developer and want to see your wares distributed on Mac, you're probably going to target either the Mac App Store or Steam. While both of these marketplaces are vibrant, GOG.com thinks it might be able to do things even better. The digital game distribution outlet -- which originally launched to focus strictly on vintage titles -- is launching a new indie developer portal for both Mac and Windows titles.

Perhaps the most interesting thing about GOG's new venture is that it could very well become a direct competitor to Apple's own Mac App Store. GOG's userbase has been steadily growing for several years thanks to well-timed sales and a vast catalog of older content for both Mac and Windows, and the company is offering a couple of options with regards to revenue splits.

Developers can opt for the same 70/30 (Developer/GOG) split as Apple offers on its digital store, or -- and this could be a big deal for many -- GOG will offer an advance on the royalties from future sales. That advance is then repaid to GOG through a 60/40 (Developer/GOG) split until the amount is repaid, at which point royalties default back to 70/30.

This novel approach to royalties can help fledgling developers score some much needed cash once a project has been finished, and may well lure some game makers away from other distribution options. On top of this, GOG promotes all of the games it sells via well-trafficked social media channels as well as the site's front page.

These perks may or may not fully equal the foot traffic advantage that the Mac App Store will likely always hold, but it's definitely worth the consideration of budding game creators.

In this article: gaming, gog, gog.com, good old games, GoodOldGames, independent games, IndependentGames, indie, indie games, IndieGames
All products recommended by Engadget are selected by our editorial team, independent of our parent company. Some of our stories include affiliate links. If you buy something through one of these links, we may earn an affiliate commission.