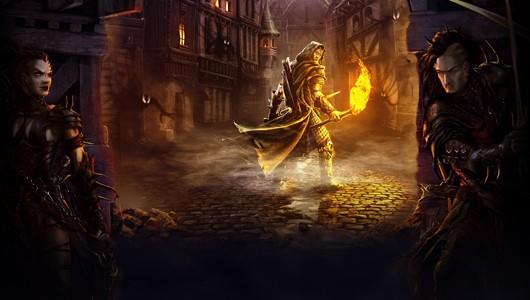 The next major content expansion for Turbine's Dungeons and Dragons Online, known around these parts as Shadowfell Conspiracy, is officially live. Dragon-slayers across the globe can now cruise the prison city of Wheloon and venture into the mountainous passes of Stormhorms, killing new monsters, collecting new loot, and earning new levels along the way.

Shadowfell Conspiracy brings a host of features to Dungeons and Dragons Online including new iconic heroes, the now-standard geographical expansion, and a level cap raise to 28. Two versions of the expansion are available: one collector's edition ($49.99) that includes three character slots and three iconic heroes and a standard edition ($29.99) including one character slot and one iconic hero. Both include varying quantities of Turbine Points and skill tomes.

If you're curious to see Shadowfell Conspiracy in action, be sure to check out our in-depth look from July.

[Source: Turbine press release]
In this article: ddo, dnd, dungeons-and-dragons, dungeons-and-dragons-online, enhancement-overhaul, enhancement-system, expansion, f2p, fantasy, free-to-play, freemium, iconic-classes, launch, launch-day, launches, microtransaction, microtransactions, morninglord, netherese, owlbear, premium, purple-dragon-knight, shadar-k, shadowfell, shadowfell-conspiracy, storm-horns, stormhorns, turbine, turbine-entertainment
All products recommended by Engadget are selected by our editorial team, independent of our parent company. Some of our stories include affiliate links. If you buy something through one of these links, we may earn an affiliate commission.