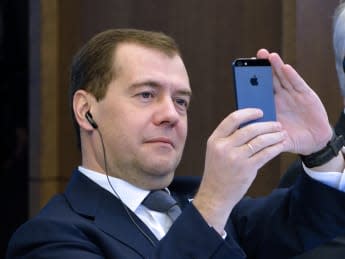 Russian Prime minister Dmitry Medvedev takes a picture of the Eiffel Tower with his smartphone during a meeting, on November 27, 2012, at French employers association MEDEF's headquarters in Paris. (Photo credi:ERIC FEFERBERG/AFP/Getty Images)

As Apple enthusiasts worldwide gear up for an imminent release of the new iPhone, Apple wants to make sure that Russian citizens don't miss out.

Apple has sent some of its top executives "to meet with key distributors to revisit how it sells devices" in Russia. TechCrunch reports that Russia has experienced a short supply of iPhones, challenges working with carriers and had a grey market in the past. Hopefully these talks will result in better availability and easier access to iPhones for Russian consumers.

TechCrunch reports that Svyaznoy, a key distributor in Russia, sells half the iPhones sold in Russia in its 3,300 stores. Other distributors of mobile phones may never get iPhones to sell or face high subsidy costs. A July article on AppleInsider reported that three Russian carriers dropped the iPhone due to marketing costs and subsidies.

As Ingrid Lunden of TechCrunch notes, if Apple launches a lower-cost iPhone, it "has a shot of killing two birds with one stone in emerging markets ... Apple can use it as an opportunity to finally give consumers there the supply that it has been demanding ... finally bring more users into the fold."

In this article: Apple, AppleInsider, Dmitry Medvedev, Eiffel Tower, Getty Images, iPhone, Paris, Russia, SciTech, Svyaznoy, TechCrunch
All products recommended by Engadget are selected by our editorial team, independent of our parent company. Some of our stories include affiliate links. If you buy something through one of these links, we may earn an affiliate commission.