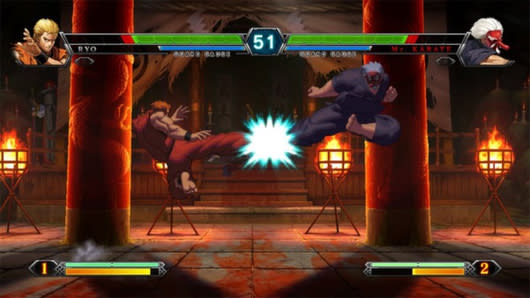 An ongoing closed beta for King of Fighters 13 on Steam has been extended to September 6, SNK has announced through Facebook. Anyone who pre-purchases the game through Steam gets instant access to the online beta.

King of Fighters 13 launches on Steam next month, on September 13. In addition to closed beta access, those who pre-purchase can also knock $5 off the price, bringing the game down to $25 up until launch.

The Steam edition of King of Fighters 13 is an upgraded version of the console game, featuring enhanced online, story and tutorial modes in addition to three special DLC versions of fan-favorite characters Iori, Kyo and Mr. Karate.
In this article: beta, king-of-fighters-13, king-of-fighters-13-steam-edition, King-Of-Fighters-XIII, pc, snk, snk-playmore, steam
All products recommended by Engadget are selected by our editorial team, independent of our parent company. Some of our stories include affiliate links. If you buy something through one of these links, we may earn an affiliate commission.