Get new life out of an old Mac Pro (Updated) 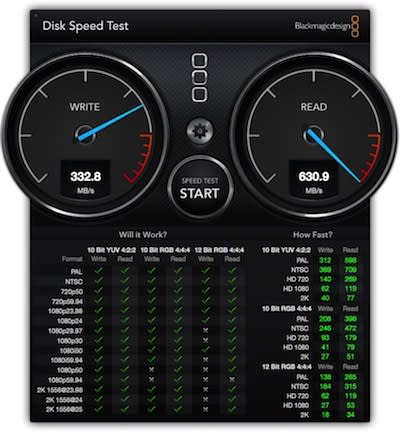 You've been drooling at the video of the new Mac Pro, but realize that your chances of having enough money to buy one of the cylindrical black speedsters when they ship this fall are slim to none. Not to worry -- iMore's Peter Cohen has just the answer if you'd like to add some life to your existing Mac Pro.

What Cohen wisely suggests is replacing your old Mac Pro's hard drive with a solid-state drive (SSD). He borrowed a couple of SSDs from Other World Computing (aka OWC) and put 'em through the test. The first was a SATA-based drive, the Mercury Extreme 6G (480 GB for US$549.99), while the second drive was a PCI Express-based drive called the Mercury Accelsior_E2 (up to 960 GB for $1,289.99).

The Mercury Accelsior_E2 is unique in that it's a PCI Express card with an SSD built on. Cohen notes that you can upgrade the SSDs down the road, as the PCIe card-based devices have removable SSDs on them. Any Mac Pro from 2008 or later should work just fine with this drive placed into one of the two 16x slots, while 2009 and newer Mac Pro models will get the best possible performance from any slot.

I won't divulge all of Cohen's test results, but let's just say that the SSDs -- especially the Mercury Accelsior_E2 -- smoked the basic hard drive in terms of performance. While the maximum capacity versions of these drives aren't exactly cheap, they're certainly less expensive than any new Mac Pro will likely be.

Update: An OWC spokesperson noted that Cohen was working with incompressible data, and that using the QuickBench suite of tests, they were able to show that the Accelsior_E2 can achieve read and write speeds that are in the 671 - 686 MB/second range (see below). Since the QuickBench suite tests more day-to-day usage, those who aren't using their Mac Pro primarily for video editing or manipulation of large files will see an even better improvement in performance. In this article: imore, Mac, macsales, owc, pcie, peter cohen, PeterCohen, sata, ssd
All products recommended by Engadget are selected by our editorial team, independent of our parent company. Some of our stories include affiliate links. If you buy something through one of these links, we may earn an affiliate commission.