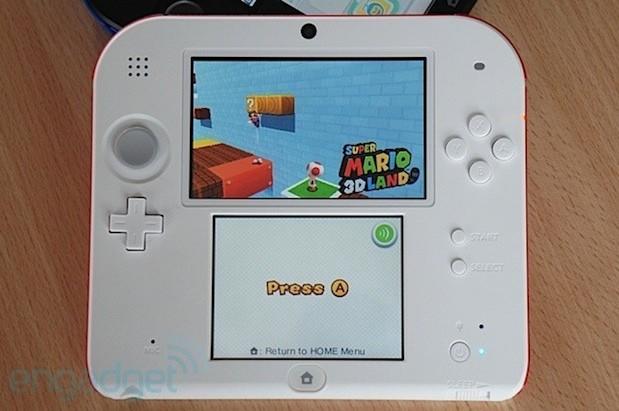 Nintendo caught us all by surprise when it announced its -- all too literally named -- 2DS handheld last week. But are we really surprised? For a company that found its last success with the "family" experience, and loves to create products in families of their own, it's perhaps surprising that it didn't create a more affordable, more accessible handheld sooner. Either way, it's here now, and will be reaching shelves by October 12th -- just in time to make those Christmas lists. Our list is getting pretty full already though, so we spent a little time with it to see if it could make the cut. If you were one of the many that blinked when the news of the 2DS landed, here's a quick primer. Internally speaking, the 2DS is exactly the same as the 3DS, with one significant, nay obvious, difference -- there's no 3D effect on the games. Pretty much everything else though, is the same on the inside. The good news is this means all of the 3DS back catalog is good to go from launch when the two models we saw -- white with red detail, or black with blue -- will vie for your attention. As always, we can imagine even more color-combos to come in the future.

As for the outside, Nintendo's done away with the clamshell form factor, opting for a slate-like, flat design. The first thing that's worth mentioning here is that it's not actually as big as you might imagine. Without perspective, the initial press shots gave an impression of size that is deceiving. In the hand, it's actually very comfortable, light, even... nice feeling. The controls sit just in the right spot so that the device is balanced, no doubt in part thanks to that wedge-shaped profile. Around the sides you'll find a volume slider on the left, headphone jack and sleep switch on the bottom, stylus and SD-card slot on the right, and shoulder buttons, cartridge slot and power up top. The camera remains above the top screen, and you can still shoot 3D photos with the stereoscopic shooter on the back, you'll just need to view the results on something else.

What better way to test the 2DS than with a bit of good old fashioned Mario. And that's exactly what we did. It only took a few seconds for us to forget about 3D completely, and while the flat design means you can't get exactly the same comfortable configuration of controls and screen position as you're used, it shouldn't take long to get accustomed to the 2DS's layout. For new entrants to the Nintendo world, those who don't want (or whose parents don't want) the 3D experience, picking up the 2DS will likely feel natural from the start. Couple that with the likelihood that the 2DS will be pitched as a value proposition-- one where you can pick one up with a game of your choice for the price of a 3DS -- and you see the appeal for some folks.

So, while it might look a little strange and might not have the title feature of its predecessor, it's perhaps not the oddity that it might at first seem. This isn't the first time Nintendo has tried something different, and it likely won't be the last. We'll have a full review in the coming weeks, but in the meantime, it looks like business as usual for Nintendo -- doing the unusual. And that's okay with us.

In this article: 2ds, 3ds, hands on, hands-on, HandsOn, nintendo, video
All products recommended by Engadget are selected by our editorial team, independent of our parent company. Some of our stories include affiliate links. If you buy something through one of these links, we may earn an affiliate commission.