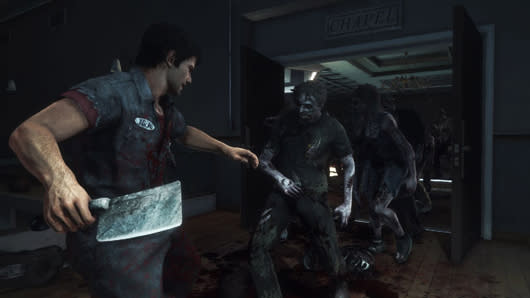 Capcom Vancouver producer Mike Jones confirmed Dead Rising 3 will follow the series' precedent of branching paths and multiple endings. "I think typically we've always had about somewhere between six and 10, something like that," Jones said during a Gamescom meeting with OXM. "There's a handful of branching points that make a significant difference, and whether you're able to play beyond the normal timeline or not."

Jones also touched on Overtime mode, the series' sandbox gameplay that extends beyond the main campaign timeline. "So there's not just the six days, we're going beyond that if you make the right story decisions. So it's not like choose-your-own-adventure crazy infinite endings, there's a finite amount, but they all [correspond to] meaningful story decisions that you make as you play through."

Dead Rising 3, in development at Capcom Vancouver as an Xbox One launch exclusive this November, stars new protagonist Nick and takes place ten years after the events of Dead Rising 2. Outside the core sandbox go-anywhere gameplay, Dead Rising 3 is anchored by an expanded weapon crafting system first introduced in Dead Rising 2.
In this article: capcom, capcom-vancouver, dead-rising-3, gamescom-2013, mike-jones, xbox-one
All products recommended by Engadget are selected by our editorial team, independent of our parent company. Some of our stories include affiliate links. If you buy something through one of these links, we may earn an affiliate commission.