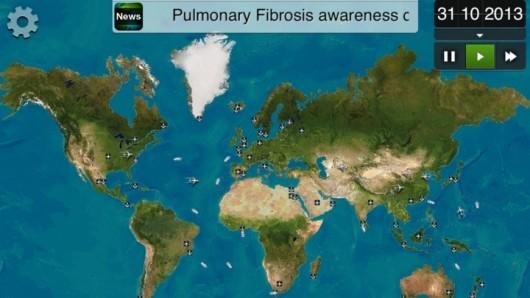 Today is Pulmonary Fibrosis Awareness Day, a fact you might already be aware of if you've been playing Ndemic Creation's mobile game, Plague Inc. Ndemic first announced a team-up with the Pulmonary Fibrosis Foundation in June, but it wasn't until today that players started seeing an in-game news item which directs players to learn more about the condition.

"This will be seen an estimated 9.8 million times in just two weeks - raising crucial awareness of this lung disease that has limited treatment options, no known cure, and kills someone every 13 minutes in the US alone," Plague Inc. creator James Vaughan wrote on the game's website.

Vaughan told the Pulmonary Fibrosis Foundation in a special Q&A that although the game tends to "educate by accident," he believes that it will help players see that, "although Plague Inc. is a game – the diseases and symptoms it depicts are very real and that there is a lot of work needed to develop treatment and cures for them."
In this article: awareness, health, ios, ipad, iphone, james-vaughan, mobile, ndemic-creations, plague-inc, pulmonary-fibrosis
All products recommended by Engadget are selected by our editorial team, independent of our parent company. Some of our stories include affiliate links. If you buy something through one of these links, we may earn an affiliate commission.