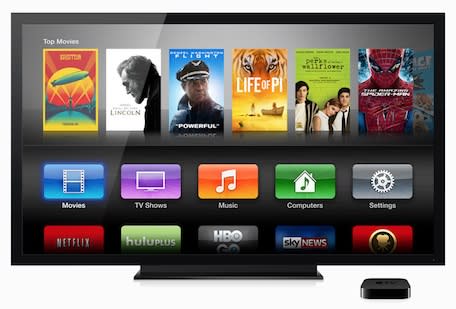 Yesterday the spotlight was shining on Apple's iPhone lineup, but next week, expect to see a refresh of the company's "hobby" -- the Apple TV. Peter Kafka at AllThingsD reports that Apple TV will gain new capabilities with an update scheduled for September 18. That's the same day that iOS 7 is released to the public.

In particular, Kafka says that AirPlay will receive a significant change, allowing content purchased from the iTunes store to play on any TV capable of working with AirPlay. Kafka explains, "they will be able to tell an Apple TV box they don't own to stream the media they do own, directly from the cloud. That's a change from the current system, which requires users to download stuff to their iPhones and iPads and fling it to the TV from there."

Kafka thought it was odd that Apple didn't even mention Apple TV or the update, but notes that they focused strictly on the new products. iTunes Radio -- a significant new way of accessing music from Apple devices -- received just passing mention by Craig Federighi during the presentation.

In this article: allthingsd, Apple TV, peter kafka, PeterKafka
All products recommended by Engadget are selected by our editorial team, independent of our parent company. Some of our stories include affiliate links. If you buy something through one of these links, we may earn an affiliate commission.