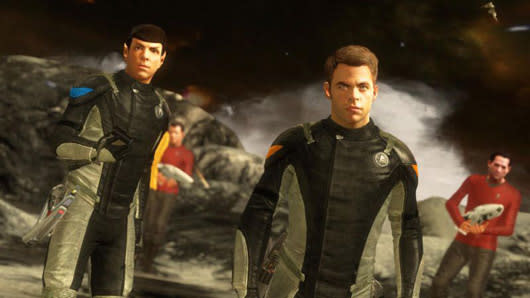 Though his team was involved at the project's outset, Star Trek film series director J.J. Abrams distanced himself from Digital Extremes' poorly received Star Trek: The Video Game prior to its completion, describing the finished product as a "big disappointment."

"The last game was obviously a big disappointment to me," Abrams told GamerHub in a recent interview. "We were actually involved at the very beginning of it, and then we realized that it was not going in a place where we were going to get what we wanted. So we dropped out and they continued to do it."

Abrams continued: "To me the video game could have been something that actually really benefited the series and was an exciting, fun game with great gameplay and instead it was not. For me, emotionally, it hurt, because we were working our asses off making the movie and then this game came out and it got [...] universally panned. I think that it was something that, without question, didn't help the movie and arguably hurt it."

Valve co-founder Gabe Newell spoke with Abrams recently regarding the possibility of films based on Half-Life and Portal.

"We're working with Valve right now on a couple of projects," Abrams told GamerHub. "The dream is to say, 'Despite its existence as a game or movie, what makes this great?' and starting from scratch -- from a place of, 'Let's make this from the ground-up great, regardless of what's come before.' [...] Anything that is based on something else needs to exist on its own terms. A lot of times, these things seem to exist as ancillary product. In which case, it will suck."
In this article: digital-extremes, jj-abrams, microsoft, pc, playstation, ps3, star-trek, valve, xbox
All products recommended by Engadget are selected by our editorial team, independent of our parent company. Some of our stories include affiliate links. If you buy something through one of these links, we may earn an affiliate commission.