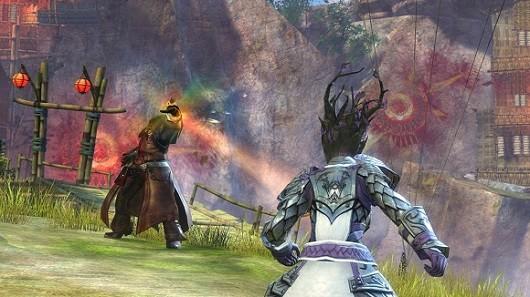 Game design lead Jonathan Sharp took to the Guild Wars 2 official forums yesterday to offer players a "high level" look at ArenaNet's plans for profession balance and improvements. Although the changes won't be going into effect until the October 15th release -- and Sharp cautions that some of them might not make it in that early -- ArenaNet wants to provide fans with a chance to see where each profession is headed and to offer feedback. Several nifty quality of life improvements are also in the works, such as updated trait tooltips and more options for fast cast ground targeting.

In another forum post, lead content designer Mike Zadorojny gave fans an update on GW2's highly anticipated looking-for-group tool. To ensure quality and stability, a beta version of the tool will be released with next week's Tequatl Rising content patch and will initially be available to a limited number of players. As the week goes on, greater numbers of players will have access to the tool.

[Thank you to Siphaed for the tip!]
In this article: anet, arenanet, balance, buy-to-play, content-update, fantasy, forum-post, guild-wars-2, gw2, jonathan-sharp, Mike-Zadorojny, ncsoft, official-forums, preview, tequatl-rising
All products recommended by Engadget are selected by our editorial team, independent of our parent company. Some of our stories include affiliate links. If you buy something through one of these links, we may earn an affiliate commission.