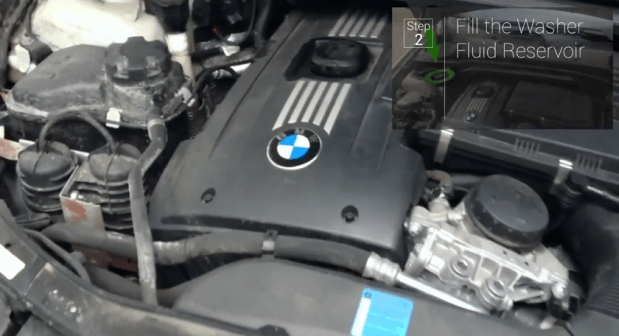 Developer Metaio knows a thing or two about augmented reality, and building on the magic of its Audi eKurzinfo app, it's created some prototype software for Google Glass that straps a car's instruction manual to your face. Instead of relying on markers, GPS or point-cloud processing, the Glass app uses reference CAD models to identify what you're looking at and overlay directions on a 3D plane. As useful as it may be for walking you through a washer fluid refill (video after the jump), Metaio has created the app to showcase its updated AR platform that's intended to work with wearables like Epson's Moverio and the Vuzix M100, as well as Mountain View's monocle. The firm's Glass app may never progress beyond proof of concept, but those attending Metaio's annual InsideAR conference in Munich this October can look forward to a live demo.

The hands-free interactive car manual prototype developed by Metaio will be the first time that augmented reality on wearable computing will be shown to be productive and commercially viable.

Metaio R&D developed this new prototype as a proof-of-concept of the capabilities of its AR platform on wearable devices. A new type of 3-D tracking and recognition technology engineered by Metaio utilizes CAD models to recognize and overlay 3-D content onto the real world counterpart. Since no markers, GPS or point clouds are required, the stability of the augmented reality experience increases dramatically, while remaining almost immune to variable lighting, glare, position, and other environmental factors that tend to interfere with vision-based experiences.

See how the technology works in the video: http://youtu.be/HPlaa1xhX4s

Metaio will update its leading augmented reality platform to include the incredible new tracking technology presented in the demo, in addition to adding support for major wearable computing devices, including Epson Moverio, Google Glass and Vuzix M-100. And looking toward a wearable ecosystem, Metaio will upgrade 3-D and 2-D visualization to include programmable shaders and other camera optimizations that will allow for more robust tracking and an overall more realistic user experience.

InsideAR attendees will get the chance to try the demo on Google Glass, along with many other wearable demos that feature hands-free augmented reality. Developers and non-developers alike can learn how they can use the Metaio AR platform to build next-generation wearable apps, with the Metaio SDK, Creator and Cloud services.

"We're going beyond one-off passive viewing experiences," says Metaio CTO Peter Meier. "Metaio is taking all the necessary steps to ensure an always on, always augmented future, and we're beginning that journey in a big way at this year's InsideAR in Munich."

To learn more and register for InsideAR, October 10-11 in Munich, please visit http://metaio.com/insideAR

Register for the BETA version of the Metaio SDK 5.0 here

In this article: app, AugmentedReality, EpsonMoverioBt-100, Glass, insideAR, metaio, mobilepostcross, transportation, Vuzix
All products recommended by Engadget are selected by our editorial team, independent of our parent company. Some of our stories include affiliate links. If you buy something through one of these links, we may earn an affiliate commission.