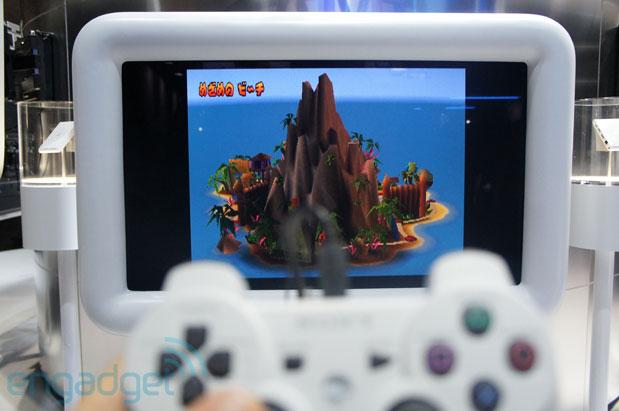 The PlayStation Vita TV is an aberration, but it's also another smart move from a company that's been on the gaming offensive since its February kickoff event for the PlayStation 4. In short, Vita TV is a Vita without a screen, encased in a small white plastic box and meant to plug into your home entertainment system. It plays Vita games, it runs Vita game carts, and it does all the other Vita stuff (media streaming, PSOne games, etc.). The Vita TV's only major difference from the handheld version is that Vita TV streams PlayStation 4 games from within the same WiFi under its "PS4 link" app, while it still goes under the Remote Play moniker on the portable iteration.

We didn't get hands-on time with Vita TV at its coming out event in Tokyo last week, but we did today at the Tokyo Game Show. Sadly, though the PS4 streaming was demonstrated on-stage by Worldwide Studios head Shuhei Yoshida earlier in the day, we couldn't try it out ourselves. We did get to check out the UI, though, and we spent our time playing UmJammer Lammy (sequel to staff favorite PaRappa the Rapper). Head below for our thoughts on the time we spent with Vita TV. So, what's it like using the Vita TV? It's a lot like using a Vita, except even more comfortable. As expected, the Vita's UI is all the easier to navigate using a DualShock 3. Menus are a snap to navigate, and just as quick -- not exactly a surprise given that, well, it's a Vita and it's a quick system. Just like we said at the announcement event, the unit itself is a pretty little thing. It's tiny and easily hidden away in a media center; not that you'd need to hide it away, given how sleek it is.

Sadly, UmJammer Lammy (and we expect many other PSOne) games suffer for the bigger TV screen. Simply put, outputting a PSOne game to an HDTV just doesn't look very good. We've got a video hands-on coming up and more thorough impressions, so keep an eye on this piece for more coming in the next few hours.

Update: Now that we've spent a bit more time with Vita TV, we wanted to weigh-in with impressions on how Vita games look. As it turns out, pretty good. Titles aren't quite as stunning as they look on the Vita's tighter OLED screen, but are attractive nonetheless. A few jagged edges were visible on the edges of on-screen graphics, but quality didn't degrade too much between Vita and TV screen. Also, we mentioned that the device was powered by USB in the video, but that's the new Vita handheld -- the Vita model uses AC input.

In this article: handson, hdpostcross, playstationvitatv, sony, tgs2013, video, vitatv
All products recommended by Engadget are selected by our editorial team, independent of our parent company. Some of our stories include affiliate links. If you buy something through one of these links, we may earn an affiliate commission.