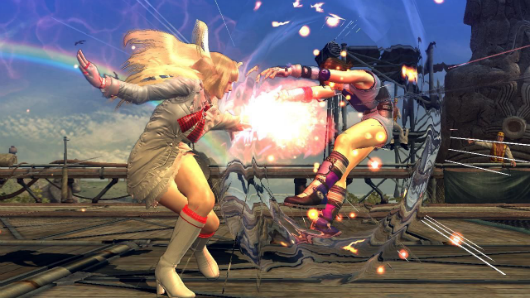 The Tekken franchise ain't doin' so bad for itself, according to a few humblebrags dropped by series producer Katsuhiro Harada during our recent visit to Namco Bandai HQ.

"In three months we've achieved two million downloads," Harada said of Namco Bandai's free-to-play, PlayStation 3-exclusive spinoff Tekken Revolution. "The Tekken franchise," he added, "has told 42.5 million copies worldwide to date – making it the top in the genre – and 20 million of those or more have come from Europe."

Harada also pointed out that "most of the user audience" for Tekken Revolution exists in the United States, with the Japanese audience "a close second," and that these results are "different from the traditional numbers" typically seen with packaged Tekken releases.
In this article: downloads, Katsuhiro-Harada, lifetime-sales, namco-bandai, playstation, ps3, sales-figures, tekken-revolution, TGS-2013
All products recommended by Engadget are selected by our editorial team, independent of our parent company. Some of our stories include affiliate links. If you buy something through one of these links, we may earn an affiliate commission.