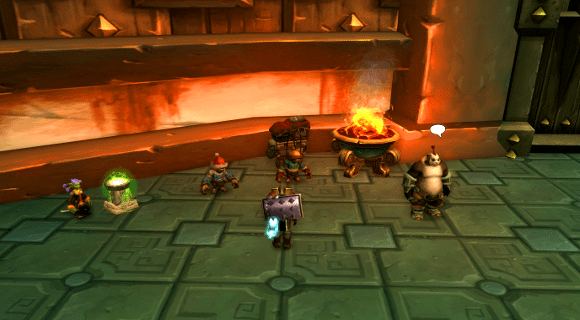 As soon as 5.4 launched, one of my biggest goals (aside from the obvious one of getting the legendary cloak) was to go out and grab gold in the tank Proving Grounds before my co-tank could. I'm sure all of you can appreciate the impulse.

While I wouldn't say gold is hugely difficult (especially now that I've taken some furtive steps into Endless, it feels like a walk in the park in contrast), it's become obvious in hindsight that I made some errors in my first few gold attempts and made finally overcoming that particular challenge more difficult than it needed to be. Thankfully I think I've learned from my mistakes here, and now, like an Afterschool Special, I can impart some useful knowledge on how best to approach Proving Grounds and go for the gold.

Maximize your gear stats for the ilevel scaling

Proving Grounds utilizes the same scaling mechanism that Challenge Modes does, and so if you've been working on CMs at any point you're at an advantage, since you are familiar with how that's going to affect the armor on your back. Thankfully, Blizzard was kind enough to put a reforger NPC in the Proving Grounds itself, if you need to make any last minute adjustments to your hit/expertise/whatever.

With regards to scaling, it's important to remember that only the raw primary and secondary stats on the gear are scaled -- gems and enchants are not, which means that any pieces above 463 ilevel are going to let you squeeze more stats out of your set. Likewise, set bonuses and the legendary meta/cloak proc do not work in PGs, so make sure you have a separate helm with an Austere Primal Diamond available.

In addition, keep in mind that the biggest threat for you is going to be high, sudden burst damage: spikes rule the roost in PGs. You'll need ample stamina to compete, so gemming straight haste isn't as viable as it is in other content. Ultimately, the more stamina you have, the more cushioning you have for spikes, which buys the healer NPC time to get you back up with her piddling HoT. Considering the healer is going to do ~75% of the damage, the mobs will die regardless -- it's your job to keep yourself standing across the waves she she can heal you and kill mobs for you.

Not to mention Sikari does not have a direct heal, so when you take a ton of damage, you'll need the space to let her HoT get you back to full. CC is valuable here, as (unfortunately) limited as our toolbox for that is.

In my current PGs set I'm running double stamina trinkets, with about 35% haste, and I'm both hit and hard-expertise capped. That's not to say that heavy-stamina is the only way to complete gold -- just that it gives you a nice cushion which may give you an easier time. In the end you'll find that quality of play is always a greater determinant of success than how you gear (but there's no harm in playing it safe).

Indirectly related to gear, don't forget to use a flask (or the haste and armor elixirs if you'd prefer) and eat the best stamina food you have available. You don't ever die, so there's no reason not to use Chun Tian Spring Rolls.

Talent and glyph for the best advantage

With regards to talents, I had to make some changes from my usual raiding loadout -- not having 9 other people to think about has an effect on the calculus, for sure.

For tier one, I went with Speed of Light, since if I'm going to use a sprint it's to get away from something as quickly as possible and for as long as possible to get some breathing room from burst damage. SoL is the best choice for that.

For tier two, I chose Fist of Justice. There are compelling arguments for Repentance, but I like the idea of having a stun available often, and apparently Repentance can fail or Sikari can break it with her attacks. Don't bother with Evil is a Point of View, Turn Evil doesn't work.

For three, I chose Eternal Flame, which is near mandatory right now in it's super-strong post-5.4 state. It's an insane amount of healing with enough Vengeance and enough Bastion stacks, and gives an impressive amount of healing aggro that can make even the Ambushers choose you over Sikari as soon as they spawn.

Tier four: Unbreakable Spirit, which is mandatory. Cooldowns are key to PGs and the sooner they are available, the better. While you can use your hand spells on Sikari, you're not going to need to do it often enough to eclipse the value of US.

For tier five I'm partial to Holy Avenger, for use as a cooldown, but I'm strongly thinking of trying Divine Purpose for Endless attempts in the future since that will let me use Shield of the Righteous more often. Comes down to personal preference.

For tier six I prefer Light's Hammer, since it is AOE and healing and useful thanks to both counts.

As for major glyphs, I've been using Divine Protection (a must have, most of the dangerous damage is from melee hits), Alabaster Shield (for some extra damage), and Blinding Light (cooldown on the ability stinks, but a 3-second AOE stun is amazing). Devotion Aura is also an option, but you can only really use that against Flamecallers and outside of later Endless rounds, they aren't dangerous enough to warrant glyphing for.

Know your friends and foes

Sikari is your only group mate in the challenge, and you'll soon come to loathe her after even a single one of her post-wipe taunts (she's a sore loser). She will keep a HoT on you across the waves, and it cannot be line-of-sighted, so don't worry about your positioning causing a wipe. In addition, she will throw out two different attacks: either a single-target Focused Chi Burst, or an AOE Crackling Jade Thunderstorm. She will always (when using single-target) focus the mob with the lowest health.

Foragers are small virmen mobs that will apply a Chomp debuff onto you, which makes them dangerous in their normally large packs. You'll want to be burn them down as soon as possible, and probably use glyphed Blinding Light to buy you some breathing room.

Rippers are the standard mooks of Proving Grounds and aren't much a priority. Don't focus them over other, more dangerous enemies.

Wind-Guards love to Wing Blast to knock you away and drop aggro, then make a dash for Sikari. A taunt can right that, as will Avenger's Shield, usually. You can position yourself with your back to a barricade so you don't get knocked far away.

Flamecallers have three abilities. One is they summon Lava Pools across the arena, which damage anything that stands in them. It'll become an important (nay, crucial!) skill for you to herd enemies into those lava pools and use them to burn down the mobs. In addition, the Flamecallers will channel Fireballs and Pyroblasts, which should be interrupted when possible. You can also counter the magic damage from their attacks with Devotion Aura for a bit.

Ambushers are a huge pain in the butt. When they spawn, they immediately go for Sikari and try to drown her in bananas. Having more than one of them on you is a daunting prospect, thanks to the damage from that attack. These will generally be a priority to get down as soon as you can so you don't get overwhelmed. Stuns can buy you breathing room as well.

Conquerors are the most imposing enemies in Proving Grounds, and in gold will likely form the roadblock between you and victory in wave 10. They will occasionally use Powerful Slam to bring up a cone of smoke and then smash anything that decided to stand in it, which then stuns for four seconds. Don't stand in that, of course, just strafe out. They also will Enrage, which necessitates a cooldown.

I'll spare you a walkthrough of gold, since wowhead has a bang-up write-up of that already done and it'd be folly to try and compete with it!

Ok, that all said, how are you doing in Proving Grounds? Have you taken them for a spin yet? How about Endless, how's that going, if you're working through there?

The Light and How to Swing It shows paladin tanks how to combat the Sha in the strange new land of Pandaria. Try out the new control gearing strategy, learn how to make the most of the new active mitigation system on your tankadin, and check out how to deck out your fresh 90 tank to get ready for any raids!
In this article: featured, guide-to-paladins, guide-to-pallies, guide-to-pallys, paladin-guide, paladin-info, paladin-protection-the-light-and-how-to-swing-it, paladin-talents, pally-guide, pally-info, pally-talents, protection-paladin-the-light-and-how-to-swing-it, proving-ground-tank, proving-grounds, tank-proving-grounds, wow-paladin, wow-paladin-info, wow-paladins, wow-pally, wow-pally-info
All products recommended by Engadget are selected by our editorial team, independent of our parent company. Some of our stories include affiliate links. If you buy something through one of these links, we may earn an affiliate commission.