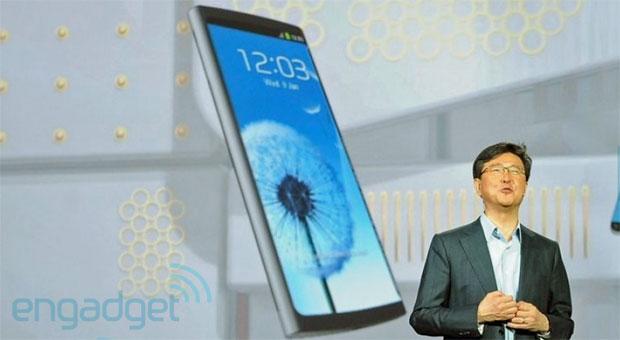 In the midst of Samsung's global launch for its Note 3, the company is already thinking about its next big reveal. This time around, it'll involve a curved display. The unnamed device could appear in Korea next month, according to Reuters, although Yonhap News (through the wonders of Google Translate) was told to expect a new device announcement some time in Q4. In either case, it's soon. The last time we heard about Samsung's handheld flexible displays was back in CES in January, where a 5.5-inch prototype device named 'Youm' was revealed -- that's what you can see above. The prototype's screen stretched to the outer edges of the device and was able to display notifications along the side, although the handheld itself wasn't flexible. According to Park Sang-jin, CEO of Samsung SDI, the new device will use a similar OLED panel and will be curve-shaped ("not completely flexible"), which will "differentiate" the device from Samsung's existing smartphone family. We suspect it may arrive with that new camera sensor too.

In this article: flexibledisplay, FlexibleOled, hdpostcross, mobilepostcross, samsung, smartphone, youm
All products recommended by Engadget are selected by our editorial team, independent of our parent company. Some of our stories include affiliate links. If you buy something through one of these links, we may earn an affiliate commission.