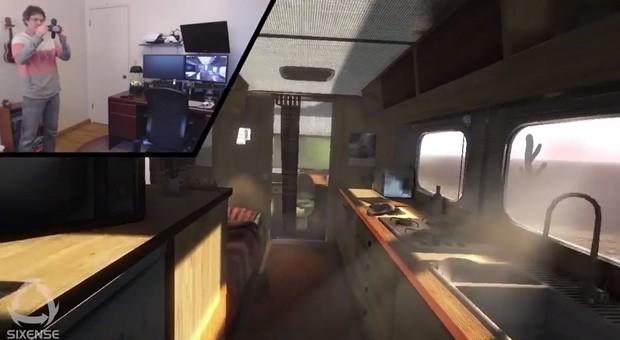 Sixense has so far promised only PC compatibility for its Stem motion tracker, but the company just teased us with the prospect of a wider ecosystem. It now says that Stem's developer kit will support Android and iOS if the crowdfunded project reaches a new $700,000 stretch goal. Mobile devices linked to a Stem tracker could serve as motion controllers, virtual cameras and even head-mounted displays. As an incentive to make a pledge, Sixense is adding a pair of programmer-friendly pledge rewards: $149 gets a one-tracker bundle with no controllers, while an early five-tracker bundle has returned at a lower $299 price. Whether or not you chip in, you can watch a conceptual demo after the break.

LOS GATOS, Calif., Sept 24, 2013 – Sixense, a leader in motion tracking hardware and software, today announced it will add Android and iOS support for its upcoming STEM System wireless motion tracking platform once the stretch goal of $700,000 has been reached on the Kickstarter project. The STEM System exceeded its initial target of $250,000 within four hours of the project's launch on Kickstarter.

The addition of mobile platform support will enable many uses of the STEM System's modular motion trackers. For example, virtual and augmented reality applications could turn any mobile device into a VR head-mounted display or virtual camera. The STEM System will also enable motion controllers for Android console devices. An updated Sixense software development kit (SDK) will support Android 3.2 or higher and iOS 6 or higher.

"Our Kickstarter campaign has generated a lot of ideas and requests from users and developers about how they want to use the STEM System and mobile integration is at the top of the list," said Amir Rubin, co-founder of Sixense. "Whether using motion-tracked STEM Controllers to play games on a mobile device or using a STEM-equipped phone or tablet as a motion tracker, we look forward to seeing what the community can do with this added functionality."

The Sixense SDK will provide both 32-bit and 64-bit builds to support iOS. For Android developers, the SDK will provide bindings for both native code and Java. The SDK library can receive data from the STEM System via wireless or USB if supported by the host OS and device.

Featuring a long range, wireless operation, improved tracking performance and support for up to five modular trackers (STEMs), the STEM System is the next evolution in Sixense motion tracking technology. The STEM System will enable developers to create motion-based content for consumer software and hardware products for Windows, Linux, Mac OS and now Android and iOS.

To support the mobile developer community, Sixense is also announcing the availability of a new STEM System "One-Tracker Mobile Bundle" to Kickstarter backers at $149. The STEM System Mobile Bundle includes one STEM Base, one STEM Pack and one STEM.

Also today, due to the great support from the Kickstarter community and the large number of backers pledging for the STEM System, Sixense is able to offer the Five-Tracker Bundle to everyone at the price of $299, which was previously limited to early backers. This will allow even more developers to start building great content that fully supports the STEM System's capabilities.

To learn more about the Kickstarter campaign for the STEM System, please visit: http://www.kickstarter.com/projects/89577853/stem-system-the-best-way-to-interact-with-virtual

In this article: android, gaming, ios, motion, MotionControl, sdk, sixense, stem, video
All products recommended by Engadget are selected by our editorial team, independent of our parent company. Some of our stories include affiliate links. If you buy something through one of these links, we may earn an affiliate commission.