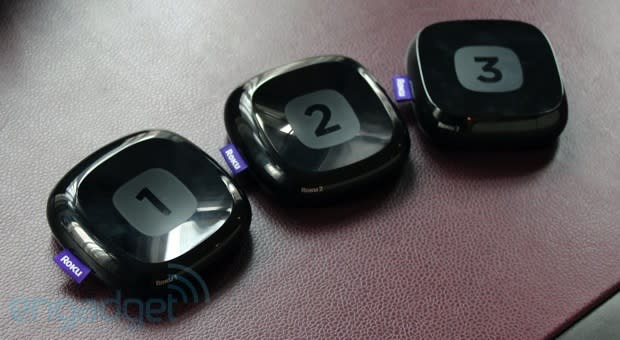 In Roku's new, clean world, users simply have to choose between the Roku 1 (Good), Roku 2 (Better) and Roku 3 (Best). Lingering around the edges of that lineup is the refreshed version of the LT (the device we spotted at the FCC a few weeks back), which'll sit beneath the 1 as a super entry-level (720p only) product. While the 3, which we reviewed back in April, remains the same, the low and mid-range models are revamped takes on the streaming box. In terms of similarities, it's clear that the company has settled on a design language, and the gloss black plastic hockey puck stylings has trickled down across the range, except for the LT -- which remains clad in Roku's trademark purple.

Stare a moment, and you'll notice some subtle differences between the members of the trio. 1 and 2, for instance, are a little thinner and more rounded than the flagship, which has fatter corners designed to accommodate the greater technology inside. All three are as light and easy to hold as ever, although 1 and 2 come with tacky bases, the better for preventing the hardware from toppling too easily against a weighted-down HDMI cable. Oh, and that piano black gloss? It's as fingerprint-tastic as ever, so bring a Lysol wipe with you when you install this thing.

'Round back, the Roku 1 and 2 carry RCA connectors alongside a HDMI-out port, a feature that was axed on the 3 in favor of dedicated ethernet and microSD card ports. Naturally, there's now a distinct gradient of features from bottom to top. The 1, for instance, is stripped down, featuring an Infra-Red remote control and only offers 1080p streaming. The 2, however, contains the same single-core CPU as its junior, but gains the dual-band WiFi and WiFi Direct gear necessary to power the remote control with its built-in headphone jack for silent movie watching. If you've already read back, then you'll know that the 3 has dual-core internals for better performance and an accelerometer inside the remote, letting you play some casual, motion-based games like Angry Birds Space on the device.

On the software side, all three come with the same refreshed UI that we've already seen, with a simple "Up, Down, Left, Right" control pattern. Notable differences include the breaking out of Movies and TV channels as new standalone submenu options, as well as access to M-GO's online offerings and an integrated billing selection. It comes with a small selection of customizable themes, as well as the promise that certain tweaks will arrive during specific holidays -- although we hope that the valentines day theme is optional for depressed singletons. Speaking of particular channels, the UK edition of the devices will carry Netflix, BBC iPlayer, Sky's Now TV and Demand 5. When we asked about the YouTube, ITV Player and 4OD-shaped holes in the service, the response was simple. While there's no news yet, it's not as if the company isn't aware that those services exist, and discussions are currently "taking place" to bring them over. Speaking of this UI update, current devices will be able to get the added options via a forthcoming software update.

While the current Android and iOS apps are capable of pushing videos to the device, we did ask if Roku had any plans to incorporate display spanning technologies like WiDi and Miracast into the platform. Naturally, the company didn't want to commit to a deadline, but it did say that there's a hope -- and an intention -- to bring those features to the current range with a future software update.

Saratoga, Calif. – Sept. 25, 2013 – Roku® Inc. today announced an all-new family of streaming players. Designed to provide a better TV experience for every streaming fan, the new Roku LT, Roku 1 and Roku 2 players give consumers more useful features – whether it's the ability to turn up a late-night flick without waking the kids or search quickly for the latest movie – that let them focus on enjoying their entertainment. These new player models will be available in all markets in which Roku is available – the U.S., Canada, the U.K. and the Republic of Ireland. Additionally, the flagship Roku 3 player which launched in the U.S. in March is now also available in Canada, the U.K. and the Republic of Ireland.

"These new players bring useful improvements at existing prices – just in time for the holidays," said Jim Funk, SVP of product management, Roku. "We're giving customers more value for their money by adding a headphone jack for private listening and dual-band wireless to the Roku 2, and support for 1080p HD video to the Roku 1. We are excited to bring these and other great features to our new line-up which provides a better TV experience across every price point."

The new Roku LT, Roku 1 and Roku 2 players along with the Roku 3 provide access to the Roku Channel Store which features a broad selection of streaming entertainment – currently at more than 1,000 channels in the U.S. and at more than 450 channels each in Canada, the UK, and the Republic of Ireland.

All new Roku players feature an updated design. In addition:

For even more entertainment options, Roku's free apps for iOS® and Android™ devices transform a phone or tablet into the ultimate Roku command center. In addition, the Play on Roku feature lets consumers stream their personal music, video and photos to a Roku player.

In other news today, Roku also announced "Roku Partners with M-GO to Bring Instant Access to Movies and TV Shows" in the U.S.

Pricing and Availability
In the U.S., the new Roku LT (model 2700), Roku 1 and Roku 2 players are available for pre-order now for suggested retail prices of $49.99, $59.99 and $79.99, respectively at Roku.com and will be available in retail stores beginning in October.

In this article: hands-on, hdpostcross, Netflix, Roku, Roku1, Roku2, Roku3, Streaming
All products recommended by Engadget are selected by our editorial team, independent of our parent company. Some of our stories include affiliate links. If you buy something through one of these links, we may earn an affiliate commission.