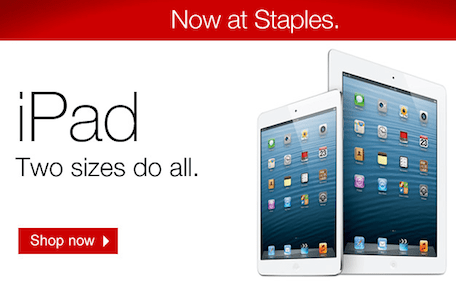 Seven months after Staples became an authorized reseller of Mac and iOS accessories, the office supply giant is now selling both iPads and iPods via its online store.

The splash page for Staples.com advertises the iPad and iPad Mini while also indicating that the items are eligible for free shipping and 5 percent back in rewards points.

As it stands now, iPads and iPods via Staples are only available online, but that may soon change if online sales of Apple's popular tablet prove to be successful.

While Staples is said to be excited about carrying the iPad and iPod online, the company has greater aspirations. The source says that Staples would like to be able to sell the iPad directly from its brick-and-mortar chain by early next year. In order for Apple to agree to this, Staples will need to refer a certain amount of online iPad sales to its customers weekly until the end of 2013. Staples stores will gain in-store kiosks to promote the iPads during the next few months.

With over 2,000 brick-and-mortar stores across 26 countries, getting the iPad into Staples retail stores would certainly help Apple sell more iPads.

In this article: ipad, iPod, retail, sales, staples
All products recommended by Engadget are selected by our editorial team, independent of our parent company. Some of our stories include affiliate links. If you buy something through one of these links, we may earn an affiliate commission.
Share
Tweet
Share