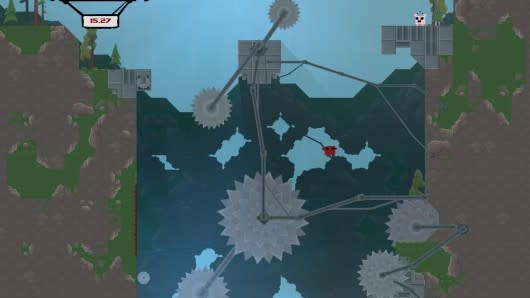 Team Meat's Tommy Refenes wrapped his mitts around a 3D-printed prototype version of Valve's recently announced Steam controller, and offers up an insightful set of impressions regarding the precision and performance of its unique dual-trackpad setup.

Refenes first tested out Valve's controller with his studio's hyper-difficult platformer Super Meat Boy. "The configuration they had set up was simple enough," he explains. "The left circle pad acted as the directional buttons, the right acted as a big giant jump button. The big problem with touch pads / touch screens is you never know when you are actually over a button or pressing it. Valve has tried to rectify this by having some adjustable haptic feedback fire when you press one of the circle pads. Throughout my play session the haptic feedback helped with the problem, but wasn't enough to solve it."

Despite reporting issues with the prototype controller, Refenes notes that he was still able to pull off some of the game's more demanding techniques. "The button configuration worked fine for SMB," he writes. "I was able to get to the Salt factory no problem. I was able to sequence break C.H.A.D. by getting the keys before he could do his attacks. I was even able to do the bandaid the super fast way in the second level of the hospital shown here."

Afterward, Refenes took the controller for a spin in Mossmouth's precision-focused roguelike Spelunky, clearing several floors before meeting his demise in the Ice Caves area. While his impressions of Valve's controller were favorable overall, Refenes notes that he'll be sticking with an Xbox 360 controller when it comes to platformers.

"If you were to ask me if I would play games with the Steam Controller ... I would say yes," he said. "If you were to ask me to choose between Steam Controller and a 360 controller, I would choose 360. Don't take that as slight to the controller though because it's more about the comfort of familiarity over functionality. I would choose a 360 controller because I have several thousand hours experience using it, however if tomorrow all game controllers were wiped off the earth and the only option was the Steam Controller, I don't think this would be a bad thing. In fact, I don't think gaming would miss a beat."

Microsoft recently noted that it is watching Valve's Linux-based living room initiative "with great interest," while Sony promises to "keep an eye" on Valve's future plans.

In this article: impressions, pc, steam, steam-controller, steam-machines, valve
All products recommended by Engadget are selected by our editorial team, independent of our parent company. Some of our stories include affiliate links. If you buy something through one of these links, we may earn an affiliate commission.