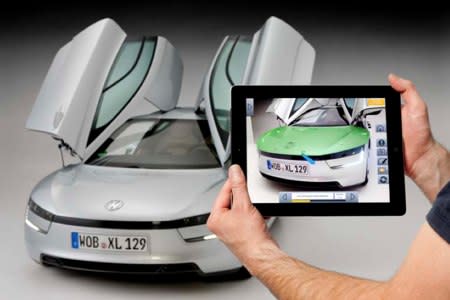 Technicians can see virtual tools applied to various vehicle parts to ensure the job is being done correctly, and even see what new parts would look like when applied to the car, which could come in handy if you're looking to customize your ride. Of course, the app still appears to be in its early stages, and given that it's designed around a car that's not officially available to the public, it may be a while before your local VW dealer adds an iPad to their toolbox.

In this article: apps, augmented reality, AugmentedReality, auto, cars, iOS, iPad, iPhone, iPod, volkswagen
All products recommended by Engadget are selected by our editorial team, independent of our parent company. Some of our stories include affiliate links. If you buy something through one of these links, we may earn an affiliate commission.