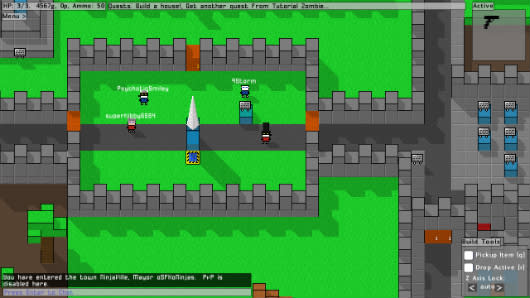 Following a successful run on Steam Greenlight and more than 75,000 registered players, 8BitMMO creator Robby Zinchak is ready to expand his game, and he has a Windows desktop version ready to roll. He also wants to upgrade the servers, build a Mac desktop version and add a new map – to do this, he's hosting an independent crowdfunding campaign during October, looking for $1,000.

Spend at least $10 and get immediate access to the Windows desktop beta, while $25 grants early access to the new map, allowing players to pick out their favorite spots and set up shop before the real land rush begins. See all the reward tiers, including tickets to a 200,000 gold lottery, here.

When 8BitMMO launches on Steam, current accounts will carry over and players will have access to their goods through any edition. 8BitMMO is technically still in development and it's free, so this is a chance for fans to show their support, and for future Steam players to get a head start.
Show full PR text
Announcing 8BitMMO: Desktop Edition

SEATTLE, WA – October 1, 2013 – Archive Entertainment is excited to announce the Desktop Edition of 8BitMMO. 8BitMMO is an indie construction sandbox game with over 75,000 registered players where users can build houses, castles, even entire cities in a retro-style massively multiplayer world.

Previously to play the game, users had to go through the somewhat tricky procedure of installing and configuring Java to run browser applets. Desktop Edition bundles Java with the game executable and even keeps the game automatically updated. Now it's as simple as running the game from a desktop shortcut.

The Desktop Edition also includes all the recent improvements to the game, such as a new leveling system, two new weapons, two new monsters, key-doors for dungeon creators to place, a friend list, and much more.

8BitMMO is now launching a crowdsourced fundraiser to raise support for server upgrades and new platforms - backers will receive a number of exclusive rewards, including immediate private beta access to the Desktop Edition. Interested players can learn more at http://8BitMMO.net/mega
In this article: 8bitmmo, beta, mac, pc, STEAM, steam-greenlight
All products recommended by Engadget are selected by our editorial team, independent of our parent company. Some of our stories include affiliate links. If you buy something through one of these links, we may earn an affiliate commission.