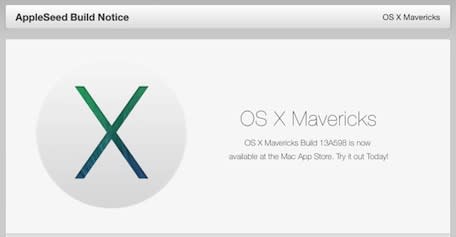 Apple has seeded what could possibly be the Gold Master build of OS X Mavericks to AppleSeed members. The build, labeled "Build 13A598," comes two weeks after the last developer preview of Apple's next Mac operating system. However, this time Apple has conspicuously left off the "developer preview" nomenclature, suggesting that this could be the final build of OS X Mavericks.

Other signs that this could be the final build include that there are no known issues with it, and of course, the fact that Apple has stated that OS X Mavericks will launch this fall. AppleSeed members can get the non-"developer preview" build by running Software Update on their Mac. If you notice any changes with this build, feel free to drop us a line.

In this article: 10.9, gm, Mac, Mavericks, os x, OS X 10.9 Mavericks, OsX, OsX10.9Mavericks
All products recommended by Engadget are selected by our editorial team, independent of our parent company. Some of our stories include affiliate links. If you buy something through one of these links, we may earn an affiliate commission.
Share
Tweet
Share