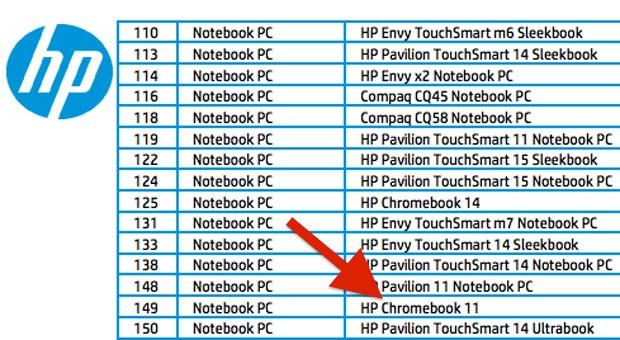 HP's fledgling Chromebook line has so far been limited to 14-inch models, but there are now hints that the company may be developing a smaller variant. A tipster has spotted mention of a Chromebook 11 in the PC builder's Energy Star qualification list, and we've also noticed a (largely blank) support page for the device. Unfortunately, the name is about all we have; HP hasn't divulged specifications or launch details, assuming the system launches at all. Still, the teasers should be good news for those who've wanted HP to make a smaller Chrome OS laptop.

Update: A source has helpfully provided an unpublished store listing (shown after the break) that reportedly shows specifications. Not surprisingly, the Chromebook 11 would be both thinner and lighter than its 14-inch cousin, at 0.7 inches thick and 2.4 pounds. Battery life should also be shorter at 6.5 hours, but owners would still get 100GB of free Google Drive space for two years.

In this article: chromebook, chromebook11, chromeos, energystar, hp, laptop, pc, teaser
All products recommended by Engadget are selected by our editorial team, independent of our parent company. Some of our stories include affiliate links. If you buy something through one of these links, we may earn an affiliate commission.