HP Pavilion 14 Chromebook review: a first attempt at Chrome OS that cuts too many corners

Things have been pretty quiet on the Chromebook front since the launch of Google's gorgeous, but pricey flagship, the Pixel. It's arguably a hard product to beat, but then again, the Chromebook battle is really taking place at the low end of the market with machines like Acer's inexpensive $199 C7 and Samsung's delightful $249 ARM-based model. This is exactly the arena HP's decided to enter with its $329 Pavilion 14, the first Chromebook with a 14-inch display. Apparently, the company's research indicates there's room for a larger Chromebook that's used primarily at home where thickness, weight and battery life are less critical. While that's difficult for road warriors like us to understand, it only takes a visit to Best Buy to see row upon row of large, cheap, generic Windows laptops, so perhaps HP is onto something. Like Acer's C7, the Pavilion 14 is a Chromebook based on an existing PC chassis. It features an Intel Celeron processor, 2GB RAM, a 16GB SSD and Bluetooth. So how does it compare to the aforementioned competition? Is there a market for a larger Chromebook that mostly lives at home? Read on to find out. %Gallery-191182% 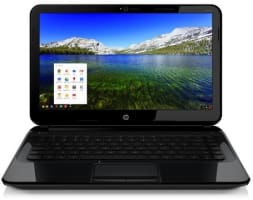 It looks and feels cheap, and manages to be one giant dust and fingerprint magnet.

It's hard to get excited about the Pavilion 14's design. There's nothing offensive about it, but it's not particularly inspired either. Unlike a MacBook, Pixel or even Samsung's ARM-based Chromebook it blends in nicely with other generic laptops. Perhaps that's the intent, since HP's chosen to build this Chromebook on the same chassis as the Pavilion 14 Sleekbook, an AMD-powered PC running Windows. At first glance, the only clue you're dealing with something different is the Chrome logo in the top-left corner of the lid. Most surfaces on the Pavilion 14 are finished in a sparkly metallic paint that's black, dark grey or dark brown depending on the ambient light. The sides, screen bezel and top half of the removable Li-ion battery are shiny black, and the individual keys and bottom surface are matte black. It looks and feels cheap, and manages to be one giant dust and fingerprint magnet.

Besides the Chrome branding, HP's logo is embossed in the bottom-left corner of the lid. There's an HD webcam, while LED and microphone above the glossy display and the company's emblem is replicated below. A thin, horizontal chrome strip separates the speaker grille from the two-button trackpad and chiclet keyboard -- it brings some flair to an otherwise bland design. The silver power button with an embedded white LED (on the left) and Altec Lansing logo (on the right) are inset in this speaker grille. A standard 3.5mm headphone jack, single USB 2.0 port, cooling vent and Kensington lock are located on the left edge. The right side is home to a pair of white LEDs (power / sleep and SSD), an SD / MMC card slot, two more USB 2.0 ports, an HDMI output, a 10 / 100 Ethernet jack, another LED (charge) and the power connector. You'll find more cooling vents on the bottom, along with the battery's sliding lock mechanism.

While the Pavilion 14 is currently the largest Chromebook on the market, it remains reasonably compact (13.66 x 9.37 x 0.83 inches) and light (3.96 pounds). It's top-heavy, however, and kept wanting to fall over backwards when we used it on our lap. Thankfully, the build quality inspires confidence -- this Chromebook should be sturdy enough to survive a drop or two.

Until the Acer C7, every Chromebook featured a standardized keyboard layout very similar to what's found on current MacBooks, with the power button integrated into the top-right corner and large Ctrl and Alt keys paired on either side of the space bar. Chromebook keyboards also eschewed the vestigial Caps Lock key and replaced it with a search button (Alt + search is the default key combination for Caps Lock on Chromebooks, and this can be changed in the settings).

HP breaks these conventions on the Pavilion 14 by recycling a PC keyboard layout. While the function key labels have been updated to reflect the Chromebook shortcuts and the Windows key now behaves as a search button, the Ctrl and Alt keys are too small and separated by other keys, making them easier to miss when typing. Even worse is the extra column of redundant keys on the right (Delete, Home, Pg Up / Dn, End). Throughout this review, we kept hitting the Home key instead of Backspace, which was extremely annoying, especially when pressing search + left cursor already provides the same functionality.

Oh, the trackpad -- it's something right out of a landfill full of dead Compaq laptops.

Of course, Acer's also guilty of changing the keyboard layout on the C7. We understand this is the result of chassis sharing to reduce manufacturing costs, but if you're a longtime Chromebook user like us, it's a jarring experience. Google really needs to put an end to this fragmentation, especially when Samsung's making no such compromises with the keyboard on its inexpensive ARM-based Chromebook. Beyond the layout issues, HP's keyboard deck is solid and the keys provide decent tactile feedback. This places the Pavilion 14 somewhere in the middle of the Chromebook pack in terms of keyboard quality.

Then there's HP's trackpad. Oh, the trackpad -- it's something right out of a landfill full of dead Compaq laptops. Welcome back to 2003. The Pavilion 14 is the first Chromebook to ditch the one-piece clickable trackpad that's commonplace today. What you get instead are two overly stiff buttons below a roughly patterned surface -- it looks and feels terrible. Then there's the unused button / indent (and matching LED) in the top-left corner of the trackpad, which is designed to toggle the trackpad on / off in Windows, but does absolutely nothing here. At least two-finger scrolling works -- it's just not nearly as smooth as on other Chromebooks. None of the other gestures illustrated in the tutorial that ships pre-installed with every Chromebook are supported. We're not sure how that slipped through the cracks (see screenshot above), but we're guessing that first-time buyers are going to be quite confused.

The Pavilion 14 features a glossy, 14-inch screen with a resolution of 1,366 x 768 pixels. Considering the larger display is this Chromebook's top selling point, we'd hoped for better-than-average performance in this area. Unfortunately, HP chose a panel that's merely adequate. Brightness is serviceable, but contrast is mediocre. And viewing angles are poor, especially in the vertical axis. Glare is a major issue with this screen and we found ourselves constantly having to adjust the lid to minimize reflections. Another point to consider is that Chromebooks like Acer's C7 and Samsung's ARM-based model pack the same resolution as the Pavilion 14 into smaller 11.6-inch displays, resulting in better pixel density. This screen might be okay for casual web browsing, but forget getting any serious work done unless you want to strain your eyes.

On the plus side, the Pavilion 14's Altec Lansing speakers sound pretty decent. It's refreshing since audio performance is generally an afterthought with most Chromebooks (Pixel excepted). The speakers are somewhat lacking in bass, but produce sound that's loud and clear overall -- perfect for that extended Hulu or Netflix session.

On Chromebooks, CPU and GPU performance generally affect page rendering, scrolling and video playback, while the amount of RAM dictates how many tabs you're able to open simultaneously and storage performance usually impacts such things as page caching and boot times. The Pavilion 14 ships with a 1.1GHz dual-core Celeron 847 (with Intel HD graphics), 2GB of RAM and a 16GB SSD. In terms of speed, it slots behind the Pixel and Samsung's Chromebook 550 (which both offer faster processors and 4GB of RAM), but ahead of Acer's hard-drive-equipped C7 and Samsung's ARM-based Chromebook. We measured an average SunSpider score of 519ms (version 0.91) and a boot time of eight seconds. Video playback was glitch free, even at 1080p, and the fan, while noticeable, was never loud enough to be a problem. Bluetooth 3.0 and 802.11a/b/g/n connectivity worked fine in our tests. In practice, the Pavilion 14 is a snappy web terminal that handles multiple tabs with aplomb. Some might be interested in increasing the amount of RAM and while this system isn't officially user-upgradable, HP's hinted that you'll find a standard SoDIMM slot inside -- hackers, start your screwdrivers.

Unfortunately, battery life is disappointing. On paper, the removable four-cell 37Wh Li-ion battery is supposed to last up to four hours and 15 minutes. In our standard rundown test -- which involves looping a locally stored video with WiFi connected -- we only managed to keep the Pavilion 14 alive and kicking for three hours and 35 minutes. That's only marginally better than Acer's C7 and significantly worse than every other Chromebook. Then again, HP's quick to point out that spare batteries are available for $63 on the company's website. Your mileage may vary, but you've been warned.

It's pretty liberating to have a machine that's focused on doing a single task well.

We have several Chrome OS aficionados in our midst here at Engadget. It's not for everyone, but if you spend a lot of time using cloud services, it's pretty liberating to have a machine that's focused on doing a single task well (web browsing). There's also something to be said for having a system that requires no maintenance and is safe to lend to family and friends. Still, you really have to live with Chrome OS for a little while to appreciate it. Once you do, it can be a very productive and rewarding work environment.

Our Pavilion 14 review unit came with version 23 of Chrome OS pre-installed, but immediately updated itself to version 27, which introduces a number of new features. Panel Windows provide a way for certain Chrome OS apps (such as Hangouts) to be docked at the bottom-right corner of the display next to the clock and status icons. Open tabs and apps are easier to manage thanks to lists which appear when you hover over the icons in the launcher -- this is similar to jump lists in Windows. Speaking of which, the launcher can now be repositioned to the left, bottom or right of the screen. Other tweaks include a hierarchical folder view in the Files app along with autocomplete during search. It's worth noting that several of these improvements don't come enabled by default and have to be switched on in the Experimental Features menu (chrome://flags). You'll find a shortcut to HP's registration page in the Apps menu, and like other Chromebooks, the Pavilion 14 comes with 100GB of free storage on Google Drive.

If -- as HP suggests -- there's a market for a larger Chromebook that spends most of its time at home, the Pavilion 14 is a poor ambassador. The company simply made too many compromises when it decided to build its first Chromebook from a recycled PC chassis. While it's reasonably thin and light for a 14-inch laptop, the non-standard keyboard layout and antiquated trackpad are dealbreakers. Add a lackluster display and mediocre battery life to the mix and you have a recipe for disaster. The Pavilion 14's only redeeming qualities are its zippy performance, decent speakers and solid build quality. Is it worth $329? Absolutely not. You'd be far better off picking up Acer's C7 for $199 -- especially now that it ships with an SSD instead of a traditional hard drive -- and enjoy the same level of performance with a better trackpad. Spend a little more and Samsung's $449 Chromebook 550 walks all over the Pavilion 14. Ultimately, we think that Samsung's $249 ARM-based model remains the best low-end Chromebook on the market today -- and the truest to form. As for us hardcore Chromebook fans? We'll give up our Pixels when you pry them from our cold dead hands.