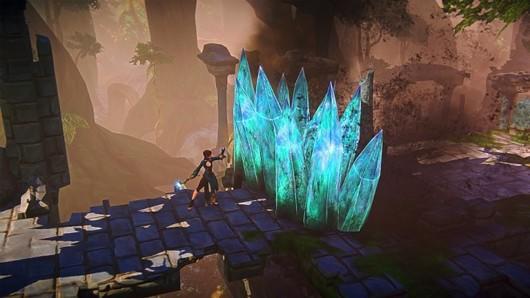 Would you like to know more about EverQuest Next's voxel-powered sandbox? SOE technical director Steve Klug recently gave an interview at EQNexus that focuses on the technology used to power the fully destructible fantasy world.

"There are many different approaches to rendering voxels, but they all boil down to what amounts to a three dimensional pixel," Klug explains. "Using voxels allows for a very editable world. They allow for meaningful destruction during combat situations. They also allow you to build the castle or dungeon of your dreams."

Klug also says that players will have access to the same building tools that SOE's developers use. The company is attempting "to make all aspects of editing really fun," Klug says. "So we like to think of them more as games unto themselves than just plain tools."

In this article: editing, eq, eq-next, eq-next-landmark, eqn, eqn-editing, eqn-landmark, everquest, everquest-next, everquest-next-landmark, fantasy, landmark, sandbox, soe, sony-online-entertainment, steve-klug, voxel, voxels
All products recommended by Engadget are selected by our editorial team, independent of our parent company. Some of our stories include affiliate links. If you buy something through one of these links, we may earn an affiliate commission.