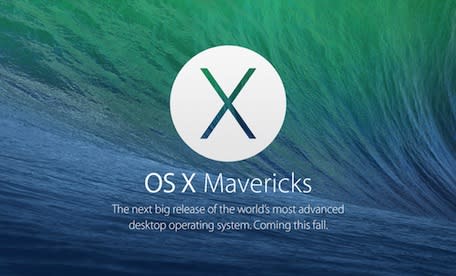 Make sure your app takes advantage of the great new features in OS X Mavericks when the world's most advanced desktop operating system becomes available to millions of customers later this fall. Download OS X Mavericks GM seed and Xcode 5.0.1 GM seed, now available on the Mac Dev Center. Build your apps with these latest seeds, then test and submit them to the Mac App Store.

The timing of the request correlates to Apple's announcement today that it is holding another product launch event on October 22. Though the latest Mac Pro and MacBook Pros are expected to be announced (along with new iPads), it's unlikely that OS X Mavericks will ship that day. However, the fact that Apple is requesting devs get their Mavericks apps ready suggests the new OS could launch in the days following the event.

In this article: 10.9, developer, Mac, mavericks, os x, os x mavericks, OsX, OsXMavericks
All products recommended by Engadget are selected by our editorial team, independent of our parent company. Some of our stories include affiliate links. If you buy something through one of these links, we may earn an affiliate commission.
Share
Tweet
Share