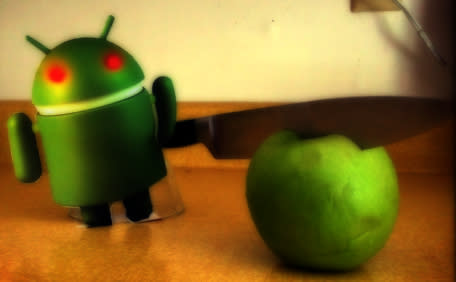 Is technology made to serve consumers, companies or causes? When Apple introduced the Macintosh, it famously invoked Orwell's vision of 1984 to promote how its little beige box would stand in the way of IBM's hegemony. In the coming years and for reasons that had little to do with the Mac, IBM would lose control of the PC's operating system, lose share in the PC market, and ultimately exit it altogether in selling the business to Lenovo. But that loss of PC market leadership came at the hands of Microsoft, which did in fact institute near-hegemony from the release of Windows 95 until at least up to the release of Windows Vista.

More than a quarter century after the launch of the Mac and following up from iPod dominance that has been Reality Absorption Field has chronicled very thoroughly, Apple found itself on the more enviable side of market dominance with the iPhone. What would come to be known as iOS would leave in the dust every mobile operating system that preceded it. Customers flocked to AT&T to get access to it despite that carrier's notorious struggles providing it with satisfactory service.

Competitors needed a way to compete with the iPhone and Google provided it in Android. At Google's developer conference, VP Vic Gondotra took up his own version of the screen-smashing mace, invoking some wording parallels with Apple's famous commercial. "If we did not act, we faced a draconion future. Where one man, one company, one carrier was the future." Indeed, Android debuted on T-Mobile but saw huge market share gains as Verizon based its strong-selling Droid line on Android.

Now, coming full circle, the company that came to represent the establishment that Apple was rallying against -- Microsoft -- recently invoked the threat of oppression, if in less dramatic rhetoric. In explaining its acquisition of Nokia's device and service business, outgoing CEO Steve Ballmer noted, "We run the risk that Google or Apple will foreclose our ability to innovate, to integrate our applications the way we have in Office, to do distribution, or to impose economic terms."

That makes sense with respect to Apple, which had developed, but has since improved, something of a reputation for being a stickler regarding its iOS developer terms and conditions, But for Google? First off, Microsoft has made so much from Android intellectual property licensing that it is a bona fide revenue stream for the company. Second, has the company not seen the Kindle Fire? It runs Android and, near as anyone can tell, doesn't suffer from much Google interference at all. Indeed, Amazon has even renamed its variant Fire OS. Google would only be a real inhibitor to Microsoft if it wanted the full suite of Google services on its devices, And still Microsoft competes with nearly all of those, it wouldn't be much of an issue.

Unlike with the original Mac and with Android, there is no real bogeyman for Windows to fight on the mobile side, just plain old competition. And that's a worthy pursuit. But if Microsoft can't cut deeply into the mobile phone market, there will still be plenty of resistance from those willing to fight the next revolution.

In this article: analysis, android, apple, iOS, iPhone, iPod, op-ed, reality absorption field, RealityAbsorptionField
All products recommended by Engadget are selected by our editorial team, independent of our parent company. Some of our stories include affiliate links. If you buy something through one of these links, we may earn an affiliate commission.
Share
Tweet
Share