Seene lets you take and share 3D images from your iPhone 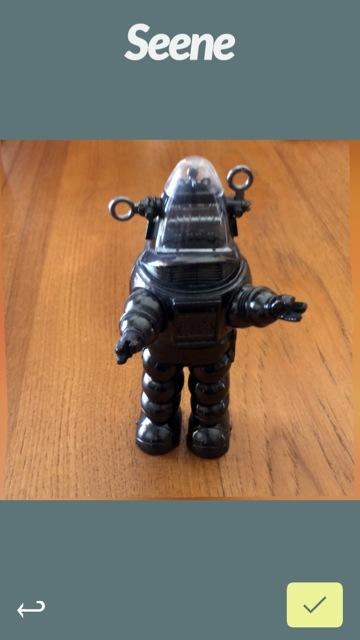 Seene is a clever and free iPhone app that lets you capture an object or person in three dimensions. It's not the 3D you get from taking two images that are horizontally displaced, but instead you move left and right, up and down while the camera is running, which produces an image that you can explore from different angles by either moving your phone or swiping your finger on the image.

If you like the result, you can share your image through a web portal, or upload it to Twitter or Facebook. The 3D images can be viewed on most modern browsers that support WebGL, including Safari, Chrome and Firefox.

How does it work? Really well, impressively so. Point the iPhone camera at an object or a person and you see a lot of little dots on your screen defining the object. If those dots aren't visible, your subject does not stand out enough from the background and you need to find a better background. In my experiments, I found that neutral backgrounds work best to not confuse the software. The app displays a kind of "pie chart" image that you can alter by moving in four directions until the four wedges have turned green. Once that has happened, there is enough data for the image. Processing is quick and easy, and from that point, you can save or send the photo.

Seene is not the first app to try to capture an object with a moveable, dimensional photo, but I had the best results with it of any I've tried. If you are interested in this kind of photography, Seene is a no risk, no cost app to try out.

In this article: 3Dphotography, iOS, iPhone, new apps, NewApps, photography, Seene
All products recommended by Engadget are selected by our editorial team, independent of our parent company. Some of our stories include affiliate links. If you buy something through one of these links, we may earn an affiliate commission.
Share
Tweet
Share