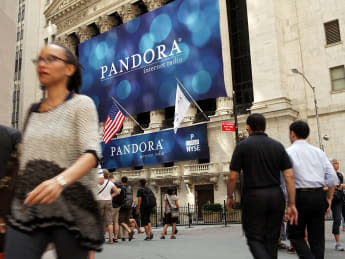 With Apple's iTunes Radio being a latecomer to the world of streaming internet radio, it's not surprising that the executives of streaming leader Pandora would not be happy with the new competitor. CNET's Joan Solsman interviewed the CFO of Pandora, Mike Herring, and found that he feels that Pandora is "a great service that does this better than anybody else," and that the latecomers like Apple are "large, well-funded companies that have agendas outside a really awesome music experience."

Not surprisingly, Herring said that Pandora sees Apple's iTunes Radio as a "credible threat" to their business. In the first five days of iTunes Radio, Apple reported that more than 11 million unique listeners had tuned in to their favorite streaming channel. Pandora, with years of experience under its belt, had almost 73 million active users last month. Still, the company feels that they offer the top experience to listeners, although Pandora has been criticized by artists who feel that they're getting a raw deal in terms of royalty payments (Apple is paying a higher rate).

Solsman's interview is a fascinating peek behind the curtain at the internet streaming radio business.

In this article: cnet, internet streaming radio, InternetStreamingRadio, itunes radio, ItunesRadio, mike herring, MikeHerring, pandora
All products recommended by Engadget are selected by our editorial team, independent of our parent company. Some of our stories include affiliate links. If you buy something through one of these links, we may earn an affiliate commission.
Share
Tweet
Share