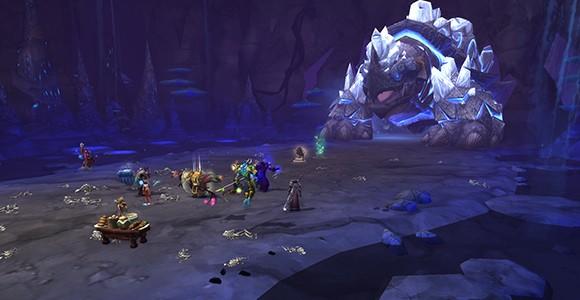 My original subtitle for today's edition of The Queue was "afadsgsg." Figured I should probably change it. Furthermore, I chose today's header image by going to a depth of 200 pages in our archive.

How do you feel about sub-race options? For example, you can choose, once you pick a dwarf for your race, to be a bronzebeard, wildhammer, or dark iron dwarf. Each would have its own benefits - maybe cosmetic, maybe more practical in terms of gameplay. Different orcish clans (Frostwolf, warsong), maybe some troll tribes uniting under the horde, etc.

This would be really cool, but could probably be solved simply by adding more cosmetic options at character creation. You could make tattoo options available, for example. A dwarf could take the sorts of tattoos that the Wildhammer dwarves have. Boom, they're a Wildhammer.

Often you hold contests and that's great. However, not being a resident of the US or Canada, it does exclude me from participating in those. I'm not gonna get too worked up about not being able to participate in something that has an infinitesimal chance of giving me something for free. There's legal reasons why you would have to set up certain rules, so my question is, would it be possibly for you to run similar contests for only EU or Oceanic Players? Would be kinda cool to show some love to the multitude of players and fans you have all over the world.

Failing that, would be nice to see you use more of those in-game rewards, as those aren't bound by the same regulations as physical prices.

This question comes up often and it's always difficult for me to answer. Not because the answer is complex, but because I hate excluding people just as much as people hate being excluded. The issue is that every single country in the world has its own laws about contests, giveaways, lotteries, and so forth. If we want to run a contest for the EU, there are 28 nations in that organization. Just for emphasis, here's a list:

We would need lawyers -- actual lawyers -- to research the applicable laws in all 28 nations and somehow write up a set of legally binding rules for our contest. For an operation the size of WoW Insider, that's simply not feasible. We don't have the manpower or the cash. The cost of setting up the contest would outweigh the value of the items we're giving out by a significant margin.

We can't simply say "Oceania" either. Since Oceania isn't a political entity, you would need to look at a geographical region in general. In what is commonly accepted as Oceania, you're looking at Australia and New Zealand as well as a bunch of other micronations, islands, and territories. Some of those territories are claimed by France. Others, the US. Others still, the United Kingdom. Again, like the EU, rules would need to be drafted for every single territory involved in the contest. Or maybe we narrow it down further. Do we only run a contest for Australia? Only for New Zealand? Half of the states in the United States of America have, individually, a total population higher than New Zealand. Can we justify that expense?

All of this is, of course, ignoring a much smaller, but still notable hurdle: shipping costs. To ship some of our prizes from the US to Europe, Australia, or New Zealand, the cost of shipping would outweigh the value of the prize. Not worth it.

It totally sucks that we can't include people, but such is the price of needing to be legally secure.

Virtual items (with technically no cash value) would be exempt from all of those things and we certainly would like to do more of those, but rarely do things such as a review copy of a new mount show up on our doorstep. What we give away tends to be extras that we get when we review a new product.

I need to find a reasonable commute to Orgrimmar. I don't want to pay too much but I hate long commutes. Where should I live?

I don't deal in Kalimdor real estate but I can't imagine rent is too high in Durotar. That place is miserable. Then again, the well-off elderly tend to retire in warm, dry climates, so who knows?

With the level cap ever expanding, do you think the lower level content deserves revision? Cataclysm was a start, but not enough

What are you looking for? Honest question. Cataclysm completely rebuilt lower level content from the ground up. I'm not sure what you mean by "not enough." Are you looking for mechanical changes in gameplay? Some kind of tutorial? The ability to skip it completely?

Do you think we will ever see an expansion which adds a third 1-60 continent? It would be an alternative to the Cata zones.

I doubt it. Cataclysm was a massive undertaking. New expansions are far more likely to add new continents beyond the previous level cap than more 1-60. Frankly, after Cataclysm, we need a new 60-70 more than a third 1-60.

Have questions about the World of Warcraft? The WoW Insider crew is here with The Queue, our daily Q&A column. Leave your questions in the comments, and we'll do our best to answer 'em!
In this article: bronzebeard, contests, dark-iron, eu, frostwolf, oceania, sub-races, warsong, wildhammer
All products recommended by Engadget are selected by our editorial team, independent of our parent company. Some of our stories include affiliate links. If you buy something through one of these links, we may earn an affiliate commission.