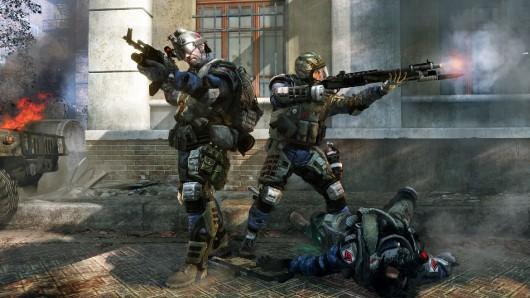 North America and Europe welcome Warface on PC today, a big step for a game that is itself a big step for its developer, Crytek. Warface is the company's first free-to-play game, the first step in a planned journey that culminates in the Crysis and Ryse studio going fully free-to-play within five years.

At the recent DICE Europe conference, CEO Cevat Yerli spoke about closing the visual gap between cinema and games, and how Crytek is using advanced lighting and modeling effects to make Xbox One historical adventure Ryse stand out. Afterwards, I asked Yerli about the difficulties in marrying F2P with the studio's reputation for high-end graphics.

Yerli talked about a possible transition period where there'll be differentiated quality across different F2P business models, but as the movement gains momentum he thinks the production values will inevitably rise. Of course, Warface isn't the only major F2P game coming to Xbox 360 in the coming months, with Wargaming.net's World of Tanks rolling onto the system later this year. Yerli, who's "buddies" with Wargaming CEO Victor Kislyi, believes implementing F2P design on consoles isn't the major obstacle for both games.

"The free-to-play design mentality and serving it on consoles is not for us a challenge, per se," he said. "The bigger challenge between both of our companies would be to transform a PC experience into a console experience. And there we have had plenty of experience doing that already. So what I'm saying is that, for us, moving Warface to Xbox 360 is quite a straightforward process where we know what it takes to make a very high quality console experience."

That said, Yerli said Warface isn't comparable to Crytek's previous work. He described Crysis as a "heavyweight shooter," with lots of things going on, whereas Warface is "more focused on the core experience of shooting," and as such easier to play and perhaps more accessible.

As for Crysis, where does that franchise fit in the studio's F2P plans?

"Crysis certainly fits into our plans, but currently we have nothing to talk about Crysis and its future," Yerli said. "Obviously as you can imagine, we are pondering a lot of ideas, just thinking about it a lot, but at this moment it's too early to talk about Crysis really."

Which is understandable, given the studio has two major games coming to consoles soon. Warface is due on Xbox 360 early next year, while Ryse: Son of Rome is an Xbox One launch game, available alongside the next-gen console on November 22.

In this article: cevat-yerli, crytek, free-to-play, microsoft, pc, ryse, warface, xbox, xbox-one
All products recommended by Engadget are selected by our editorial team, independent of our parent company. Some of our stories include affiliate links. If you buy something through one of these links, we may earn an affiliate commission.