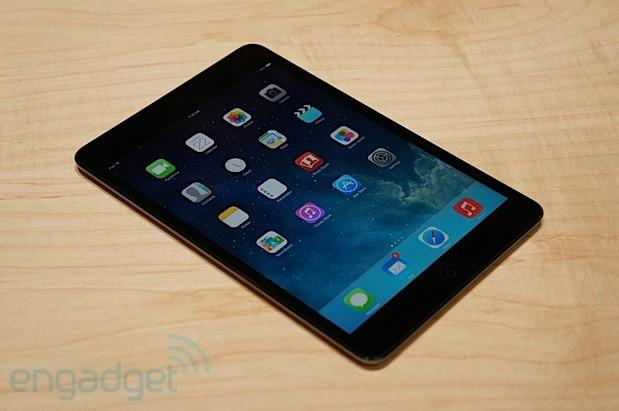 The new iPad mini, with all of its Retina display goodness, is now official. Announced today at Apple's "lot to cover" event, the new mini was one of the final products shown off at the show. There isn't much on the outside that we haven't seen before -- in fact, it still sports the same home button, indicating that it doesn't feature a Touch ID fingerprint sensor. But, there is one glaring exception: the 2048 x 1536 Retina display, which amounts to 324 ppi. This is the same pixel count as the iPad Air, which means it actually has a much higher pixel density (264 ppi) than its bigger sibling. And even more importantly, when compared to the original iPad mini that came out last year, this is a rather significant bump in resolution and we came away much more impressed with the mini as a result.

On the inside, the mini includes a jump to an A7 processor (the same one used in the iPhone 5s) and at first blush, it does seem a bit faster than the original. Still, we imagine the biggest boost in performance will have to do with multitasking and gaming, which we unfortunately weren't able to do much of during our time with the device. You'll also be able to take advantage of the same M7 co-processor now found in the iPad Air and iPhone 5s. Check out our gallery of images below, as well as a video showing off the new iPad mini after the break. 24
In this article: apple, hands-on, ipadmini, ipadmini2
All products recommended by Engadget are selected by our editorial team, independent of our parent company. Some of our stories include affiliate links. If you buy something through one of these links, we may earn an affiliate commission.