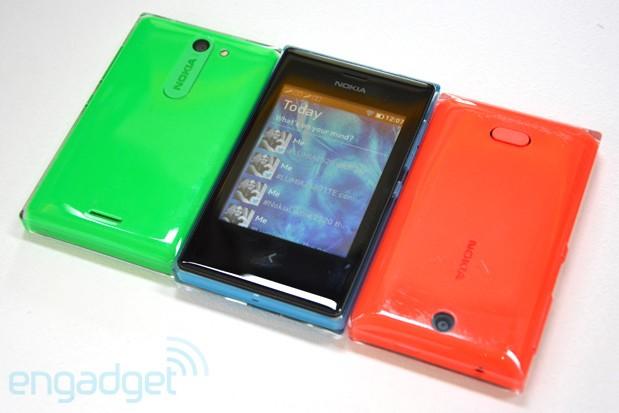 The Abu Dhabi spotlight might be set squarely on the new Lumia devices, but the Windows tablet and pair of Windows Phones amounted to only half of the products Nokia announced today. A trio of Asha handsets also made the trip to the desert: the 500, 502 and 503. These three devices, which essentially are slightly revamped versions of the Asha 501 released this spring, will likely get the most facetime in emerging markets thanks to their smartphone-like features and reasonable price. The 500 -- the least expensive of the three -- is slated to cost $69 SIM-free, which is a solid $30 less than the 501; on the more expensive end of the pricing spectrum is the 503, which is $99 and comes with quad-band GSM plus dual-band HSPA. (The 501 offered EDGE speeds for the same price, so this is a nice step up.)

On the outside, the new Ashas don't look that much different than the 501, with one giant exception: all three now feature a box-like layer of transparent polycarbonate surrounding the standard colored casing. This is a pretty fresh design technique we haven't seen much of before; this extra layer prevents wear and tear on the regular casing, and keeps it from losing its color over time. That said, some of the demo units already had some scratches on the transparent casing, so only time will tell how durable the retail units will be. Anyhow, because of this design, you can expect the new Ashas to be a bit bulkier than its predecessor, but this likely won't come as too much of a distraction to anyone because of its petite size. In this article: asha500, asha502, asha503, hands-on, mobilepostcross, nokia, nokiaworld2013
All products recommended by Engadget are selected by our editorial team, independent of our parent company. Some of our stories include affiliate links. If you buy something through one of these links, we may earn an affiliate commission.