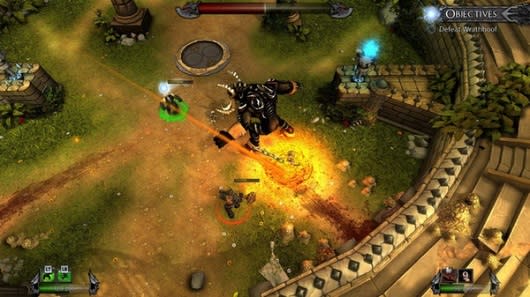 Action arcade game Forced is now available on Steam. The multiplayer-focused combat arena game is 20 percent off ($11.99) until October 31.

Forced is described as a mix between Diablo and Left 4 Dead, featuring local and online cooperative battles for up to four players. Players control slaves in one of four skill classes in "the toughest fantasy gladiator school of them all, condemned to fight to the death." Forced is available on PC, Mac and Linux and also comes in a four pack bundle, currently discounted to $35.99, for those that know exactly who they'll team up with in the game's campaign.

The game's developer BetaDwarf has a unique history, as the group of eight lived in an abandoned classroom at Aalborg University in Denmark for roughly seven months while creating Forced. After the developer's hideout was discovered by one of the school's instructors, the team of ten lived together under one roof while continuing development. Additionally, BetaDwarf raised $65,413 on Kickstarter in December 2012 to fund the project.
In this article: arena, betadwarf, forced, mac, pc, sale, STEAM
All products recommended by Engadget are selected by our editorial team, independent of our parent company. Some of our stories include affiliate links. If you buy something through one of these links, we may earn an affiliate commission.