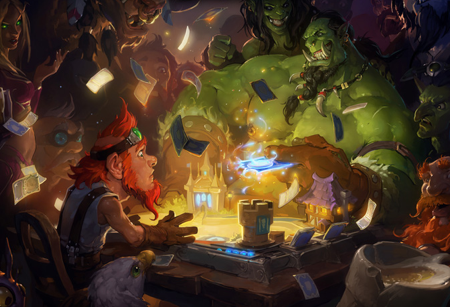 When it comes to creating addictive gaming experiences, Blizzard -- the diabolical geniuses behind the most popular MMO on the planet, World of Warcraft, among other titles -- are certainly masters. Its latest digital drug, which also happens to carry the Warcraft brand, is a virtual strategy card game called Hearthstone: Heroes of Warcraft, and it's currently in closed beta testing. But despite not being officially "finished," the game is an utter treat to play, and it just might be your new addiction.

Collectable card games are seldom easy to understand, with hundreds of different cards, each with their own powers, offensive and defensive effects, etc., but Hearthstone makes the system so easy to grasp that it's impossible to get lost. The simplicity starts with the main battle screen, which features just the decks of both players, a central area where your cards face off and an image of each player's "hero" character. It's instantly accessible, even if you've never touched a card game in your life. Each of the nine hero characters specialize in a specific play style, be it the Warrior's reliance on weapons or the Hunter's ability to command beasts and fight from a distance. Once you've given each class a try in the tutorial mode, you'll likely have a favorite that you can begin to focus on.

Each card costs a specific amount of mana to be played, and your mana bar goes up with each successive turn. You draw a single card (or more, if you play a card that prompts you to draw again) at the beginning of each round. This means that battles start out tamely, but quickly become massive shows of force on both sides. In the first, second or third rounds, you may only play one card, but by the 10th round, you can drop several at once. This battle style gives even novice players a chance to slowly wade into each skirmish without feeling immediately outmatched. Of course, as easy as it is for newbies to feel comfortable, besting your opponent often takes a great deal of strategy. Playing specific cards at the right time is crucial, and as with all card games of this type, good players can make a little luck go a long way. If you win -- which is accomplished by taking down the opposing player's hero -- it's extremely gratifying, but if you lose, you'll likely know exactly where you went wrong.

Hearthstone is free to play, but just like a physical card game, it makes its money by selling booster packs. You are given the base set of cards for free when you start the game for the first time and, to be fair, you could conceivably play the game forever with just these cards, but temptation will soon get the better of you. When it does, you'll find yourself buying booster packs containing new and exciting cards, with the (small) chance to score super rare, game-changing cards that can turn the tide of a battle. Again, buying cards is entirely optional, and I personally played the game for weeks without ever dropping a single cent. Eventually though, your curiosity will likely get the better of you and you'll want to further customize your deck with additional cards. The good news is that the card packs aren't very expensive, and you are guaranteed to score at least one mildly rare card in each pack.

Right now you can play Hearthstone on OS X and Windows, but the company has confirmed that an iPad version is on the way as well, which spells bad news for tablet owners with weak wills and fat bank accounts. If you get a chance to play it (and if you're a TUAW fan, you have a really good chance right now), don't pass it up.

In this article: beta, features, games, gaming, giveaway, hearthstone, hearthstone heroes of warcraft, HearthstoneHeroesOfWarcraft, Mac, warcraft
All products recommended by Engadget are selected by our editorial team, independent of our parent company. Some of our stories include affiliate links. If you buy something through one of these links, we may earn an affiliate commission.