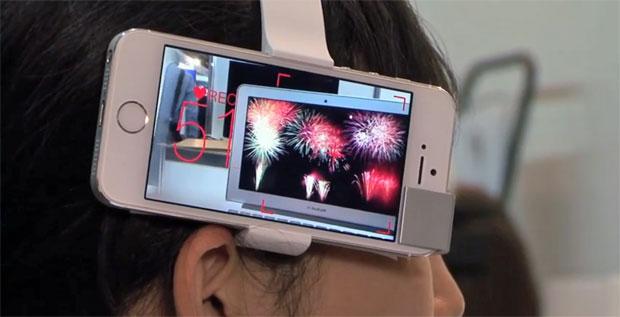 Neurocam uses brainwave sensors similar we've already seen in moving cat ears and TV navigation, but this time hooks up with your smartphone camera. This prototype, demoed at last week at Japan's Human Sensing 2013 conference, gauges your interest on a scale of zero to 100, and if your brainwave readout tops 60, it'll start to record video, eventually transforming the footage into five-second GIFs. In order to get the iPhone camera to eye-view, the smartphone connects to a headband which houses the brainwave sensor. Sideways on, the camera sensor then faces through a prism so it's looking at what you're looking at... and not just the inside of your ear. The experimental wearable, barring the smartphone hanging off, looks pretty similar to other brainwave reading wearables, although the addition of an iPhone will certainly make it weightier in comparison. The Neurocam is the latest product to come from the Neurowear project, which already gave us the aforementioned NekoMimi cat ears. We're not sure how comfortable we'd feel having all those radio waves near to our head for an extended period, although according to DigInfo News, this device, including its current design and shape, are still in the throes of development for now. The world always needs more GIFs.

In this article: brainwave, japan, mobilepostcross, nekomimi, neurocam, neurowear
All products recommended by Engadget are selected by our editorial team, independent of our parent company. Some of our stories include affiliate links. If you buy something through one of these links, we may earn an affiliate commission.