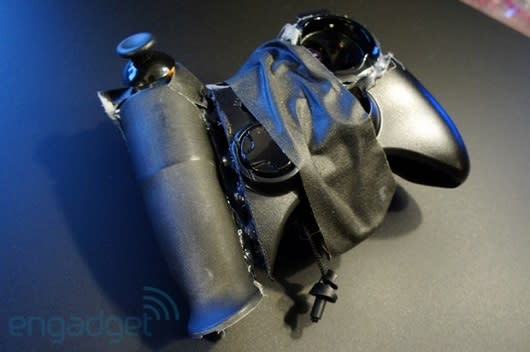 Valve recently showed off a few of its Steam Machines and Steam Controller hardware precursors to our friends at Engadget. Among the group of hacked-together gadgets was a motion controller that used pieces from the Razer Hydra controller described by designer Greg Coomer as "a Frankenstein" game pad.

That particular prototype controller broke apart with "gyroscopes or magnetic sensors in either path, to sense orientation and position." As seen in Engadget's photos, other prototype controllers featured touch pads similar to the official Steam Controller unveiled in late September, and others still even had large trackballs. We'd like to think that Valve was developing its own Golden Tee machine at one point with those controllers at the forefront.

Coomer also discussed a prototype device that acted as a "communication and input core," which hasn't been completely shelved by the company just yet. Resembling a phone, the gadget wound up being "more abstract and farther removed from anything people were familiar with," and ultimately introduced "noise to the experience of playing your games."
In this article: controller, game-pad, hardware, pc, prototype, steam, steam-controller, steam-machines, valve
All products recommended by Engadget are selected by our editorial team, independent of our parent company. Some of our stories include affiliate links. If you buy something through one of these links, we may earn an affiliate commission.