Tis the season to subscribe: What's on my annual service renewal lists

Everpix goes out of business, subscribers will be refunded 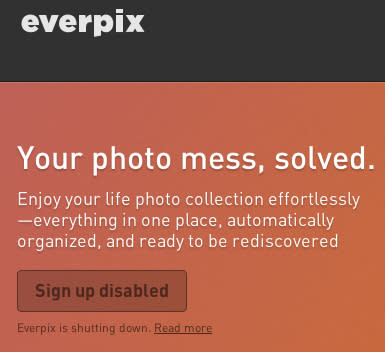 Everpix has announced that after two years, it has closed shop, with the service disappearing by December 15.

It's left those with large photo collections at a loss. Everpix was created with those users in mind, as it was designed to corral a lot of photos into mangeable collections. Everpix designer Wayne Fan told TUAW's Dave Caolo in June that the average customer had uploaded 10,000 photos, and Dave himself said he had 14,000 photos on Everpix. TidBITS Managing Editor Josh Centers said he had uploaded a 70 GB photo collection to the service.

Following the fate of a number of other startups, Everpix failed to attract enough funding to keep the company going and pay its employees. The Verge has posted a lovely feature on the demise of Everpix and how founder Pierre-Olivier Latour and his team worked to the last-possible second to keep the service going, including an acquisition from Path that fell through.

Subscribers will be fully refunded. The Verge notes this will cost roughly US$200,000, that figure including the employees' full salaries. Everpix is selling off its tech to help cover those costs, but admitted in the support document on its site that it will take time to refund subscribers.

As of today, Everpix is no longer accepting new users and is in read-only mode until the servers shut down for good. Users have until December 15 to download photos from Everpix, if they don't have an available backup at hand.

In this article: everpix, iOS, iPad, iPhone, photography
All products recommended by Engadget are selected by our editorial team, independent of our parent company. Some of our stories include affiliate links. If you buy something through one of these links, we may earn an affiliate commission.