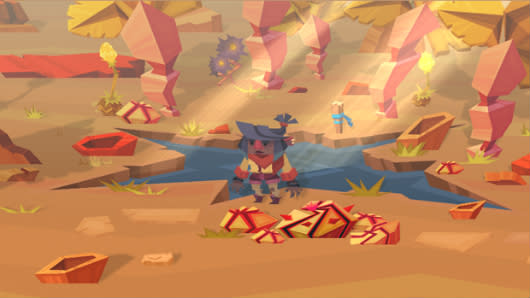 Dyscourse is Owlchemy Labs' most ambitious project to date – it's a survival title for PC, Mac and Linux that tackles groupthink, the futility of earning a degree in art, and branching narrative paths depending on each player's unique choices. Really this time, Owlchemy founder Alex Schwartz tells me.

"Throughout the history of games, the claim has been made multiple times that player choice significantly affects gameplay," he says. I offer Telltale's The Walking Dead as one game that some players think promised too much control over the story. Schwartz says he loves that series but sees how voice acting and a big dev team pushed it to be a more linear story.

Dyscourse doesn't feature voice acting, instead relying on text, and the game takes place in a "narrative playground," the island where main character Rita crash-lands with a ragtag group of tourists. Schwartz says Owlchemy's approach means each player will have a unique experience, tell a different story, and probably kill their companions in different ways. By accident, of course.

"We're using some really interesting in-house tech to manage the writing process, but it's definitely a challenge," he says. "What it boils down to is attempting to write a large, multi-tiered narrative that can be approached from many different angles and a player simply only sees a small fraction when they play through a single time. Using variables to detect whether a player experienced or did not yet experience a certain dramatic moment – such as, 'Did the player find that hidden key yet?' or, 'Has the player uncovered the hidden backstory of one of the survivors?' – we can dynamically adjust the experience for each playthrough."

Dyscourse is more than a Choose Your Own Adventure game, Owlchemy promises: It offers an AI interaction system, a huge and uncharted island, and a memory system. Rita, it turns out, is great at remembering things, which is good considering players don't start off with a map.

Dyscourse is on Kickstarter now, seeking $40,000 to beef up its own funds in the project. It's in the works for PC, Mac and Linux, and it's going to be on Steam, sidestepping Greenlight entirely.

"Over the past couple of years, through multiple Steam releases, we've built up a great relationship with Steam," Schwarts says. "They've placed a lot of trust in our ability to ship a great game and they're very excited to see Dyscourse make its way into their customers' hands."

Owlchemy has launched Snuggle Truck, Jack Lumber and AaaaaAAaaaAAAaaAAAAaAAAAA!!! for the Awesome on Steam. Those are all complete games, but they're not on the level of Dyscourse, Schwartz says, and crowdfunding offers the studio a new perspective on development. Owlchemy's standard strategy is to alternate developing an original IP with contract work to keep the studio running.

"Developing a longer-form game was one of our early goals at Owlchemy," he says. "This kind of development allows us to do things that we weren't able to do with prior titles like Jack Lumber and Snuggle Truck. One major advantage is that we can better involve our fans and players and let them into our development process to help shape the final product. We're excited to be more open with our development and think this will have a very positive impact on the game that we deliver."
In this article: dyscourse, Indie, kickstarter, mac, owlchemy-labs, pc
All products recommended by Engadget are selected by our editorial team, independent of our parent company. Some of our stories include affiliate links. If you buy something through one of these links, we may earn an affiliate commission.