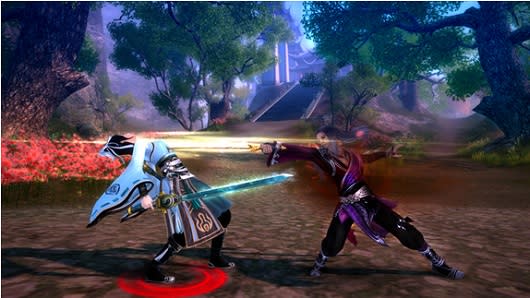 We looked at a lot of the details of Age of Wushu's Ultimate Scrolls expansion last time, but we should also reflect a bit on the implications of the new changes. The Mt. Hua expansion was mostly positive, and I was very excited to see the new mentoring program and token systems. I'm not as hyped for Ultimate Scrolls.

Whereas Mt. Hua added accessibility, a new battleground, and more fun things to do for everyone, Ultimate Scrolls is primarily an expansion for top players. There is very little to do in this expansion if you don't have leveled meridians and a maxed second or third internal skill. Even though I'm in the one percent, I don't think it's very fair to the majority of players who are not. I'll be honest when I say I'm not sure what Snail Games meant by "Tier 5" gear; I'm going to assume that it means Tier 4 comprises the most advanced workbench recipes currently available, though there are more than four "tiers" of recipe currently in the game.

Regardless, this is gear creep. The good news is that the gear creep seems to be available to existing crafters and may not require Ultimate Scrolls recipe drops. Unfortunately, the system does seem to require some form of questing (you're required to at least unlock a new instance, if not clear it), which will make it hard on newer crafters. All of the mandatory materials for tier upgrades, save for the Tier 3 to Tier 4 upgrade, will cost silver taels. The jade upgrades will cost 250 liang. For an item of that level, I suppose it's worth it.

Because most players are wearing (what I assume to be, anyway) Tier 2 copper or silver or Tier 1 iron gear (or NPC gear), I'm not sure what kind of market impact this will have. It will certainly sink a lot of silver taels out of the economy. It may lower the price on Tier 1/2 gear more, since richer players will not need it for gear upgrades. However, I don't think it will affect the average player much. The cost of workbench gear is out of reach of the average player, and I don't see the average person's earning potential changing in this expansion, so I don't think the lower-level markets will change. The market for gold/jade gear will also definitely increase as people snatch up lower-tier items for converting to higher tier ones.

As far as I know, the rerolling system applies only to weapons, which is somewhat of a relief. I'm not sure how easy it will be in the new system to get multiple +10% rage skill bonuses, but it seems pretty expensive. It seems most useful for rerolling bad items into better ones.

Overall, expect the rich players to get more powerful this expansion, and expect very little rich player money to enter the hands of the working class poor. Fortunately, upgrade materials may increase in demand, but I'm not sure about this and I'm not holding my breath. A quick talk about marriage

The marriage system is good, right? Well, yes and no. First, the obvious: no same-sex marriages, and women cannot propose marriage to men. That's fine, since it's supposed to represent Ming China. It feels authentic to have so many restrictions put on it, but it is a bit limiting. Overall I think those elements are net positive strictly for the immersion factor. People will likely talk about in-game marriage for a long time before they do it, and the girl can be the first one to bring the topic up to the guy. Mechanically, he has to do the proposal, but she can still be the initiator on the social end!

The bad news is that first, both players have to be VIP, and second, the cheapest (and worst) marriage ceremony option costs 400 liang. It also requires an affinity value of 2000. These values are ridiculous. The affinity value of 2000 is especially damning. It pretty much ensures I will not get married, at least. If you were looking to have a marriage with your real-world partner in-game, think again unless you want to grind for it (and not the fun kind of grinding, either). Forcing PvE upon players who want to get married is ridiculous.

That fee of 400 liang is more than a lot of people have (remember those old market posts?), and the most expensive wedding clocks in at a monstrous 10 ding. Only the most fabulously wealthy need apply. It does not seem that the players need to remain VIP afterward, but with those requirements, chances are if you get married in-game, you're probably already married -- to Age of Wushu.

Next time, we'll cover the new alignment system changes (and they're cool!), as well as the new instances and school martial arts, plus possibly some other things that were discussed in the interview questions.

Age of Wushu is a wonderous place, full of hidden secrets, incredible vistas and fearsome martial arts. Join Patrick as he journeys through China, revealing the many secrets of this ancient land. The Ming Dynasty may be a tumultuous time, but studying The Art of Wushu will give you the techniques you need to prevail.
In this article: age-of-wulin, age-of-wushu, art-of-wushu, china, chinese, chinese-mythology, column, equipment, expansion, expansions, featured, gear, gold-sink, kung-fu, marriage, martial-arts, martial-arts-mmo, money-sink, opinion, sandbox, snail, snail-games-usa, ultimate-scrolls, update, wedding, weddings, wushu, wuxia
All products recommended by Engadget are selected by our editorial team, independent of our parent company. Some of our stories include affiliate links. If you buy something through one of these links, we may earn an affiliate commission.