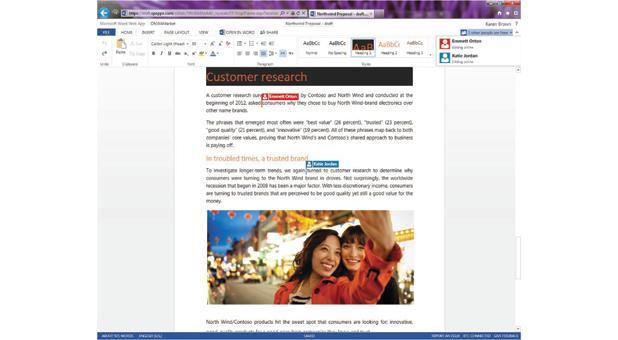 Microsoft promised earlier this year that it would soon be updating its Office Web Apps so that multiple people could edit documents at the same time (yes, just like in Google Drive). Now, five months later, the company's finally ready to show us the finished product. Starting today, you can work on a Microsoft Word document, PowerPoint presentation or Excel spreadsheet, even if someone else is already in there editing. And if you happen to be offline, you can make your changes in the regular desktop suite and they'll sync up with the web version once you re-establish an internet connection.

As with Google Docs, an unlimited number of people can edit at once -- at least in Word and Excel (PowerPoint has a hard limit of 20 simultaneous editors). Also like Google, Microsoft gives you not one, but two indicators as to where someone is inside the document. These include a list in the upper-right corner, with helpful specifics like "Dana Wollman editing slide 12." Then, once you scroll through the document, you'll also see pinpoints indicating what people are working on. And in case none of that was intuitive enough, each person will also be marked with a distinct color (yep, also like Google Docs). As you'd expect, all of this will roll out for both SkyDrive and Office 365, though Microsoft warns it could take until the end of week before these co-editing features are available to everybody.

Additionally, Microsoft made a few tweaks to the individual web apps themselves. These include the ability to find and replace words in Word, as well as insert headers and footers. In Excel, meanwhile, you can now drag and drop cells and reorder sheets. The Web version also now supports more workbook types, which should help if you use sheet protection. Finally, if you're used to editing presentations in PowerPoint, you now have the ability to crop photos from within the web app. Also, though there isn't an update on this, per se, Microsoft did reiterate that it's on track to release an Android tablet app sometime within the next few months. Don't say we didn't warn you.

In this article: microsoft, microsoftoffice, MicrosoftWebApps, OfficeWebApps
All products recommended by Engadget are selected by our editorial team, independent of our parent company. Some of our stories include affiliate links. If you buy something through one of these links, we may earn an affiliate commission.