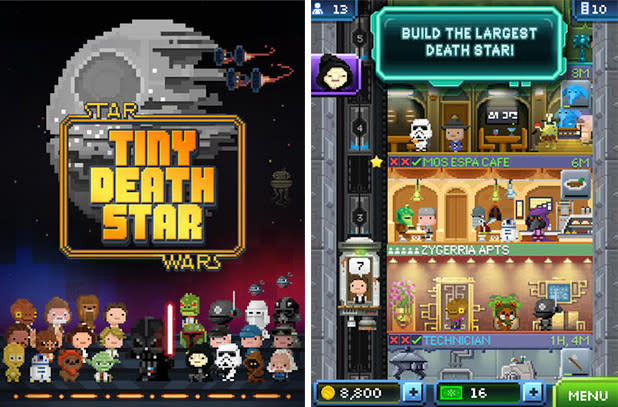 There's no shortage of official Star Wars-themed apps on iOS, Android and Windows Phone, but Star Wars: Tiny Death Star might be the most retro of them all. A spin-off of NimbleBit's popular iOS classic Tiny Tower, Tiny Death Star puts you to work for the Empire as you buy, build and oversee the development of its moon-sized space station. It's the result of a partnership between Disney, LucasArts and NimbleBit, bringing together all of your favorite Star Wars characters in the familiar Tiny 8-bit style. You'll also employ 30 unique galactic "bitizens," including Wookiees and Ewoks, as you build as many as 80 residential and commercial Death Star floors. Like other freemium titles, Star Wars: Tiny Death Star uses its own in-game currency, called "Imperial Bux," which boost construction and lift time restrictions, meaning you probably won't go it Solo in your fight against the Rebels.

In this article: android, death star, DeathStar, disney, ios, lucasfilm, mobilepostcross, star wars, StarWars, tiny tower, TinyTower
All products recommended by Engadget are selected by our editorial team, independent of our parent company. Some of our stories include affiliate links. If you buy something through one of these links, we may earn an affiliate commission.