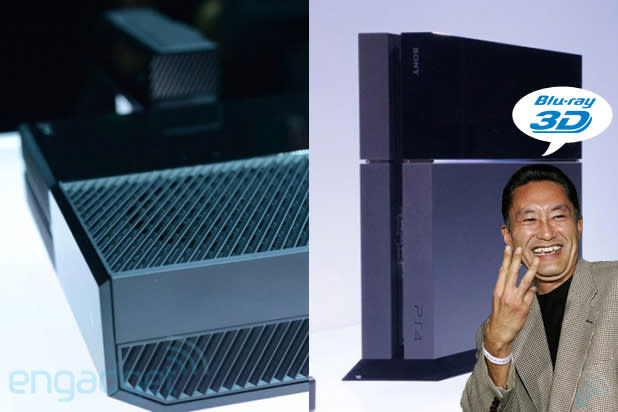 Now that Microsoft has adopted Blu-ray for its upcoming Xbox One, some of you might have been wondering if this next-gen console will support 3D Blu-ray movies. Well, the answer is no, or at least not yet. Back in May, Director of Xbox Programming, Larry Hryb aka Major Nelson, vaguely confirmed 3D and 4K output on the Xbox One, but his company has recently told CNET that the machine will be shipped without 3D Blu-ray playback capability. Having said that, there's still a chance of adding this feature via an update later on.

On the other hand, Sony has just confirmed to us that the PS4 will definitely come with both 3D Blu-ray playback (requires the 1.50 firmware update and then a one-time activation) and 3D gameplay (albeit a current lack of 3D titles). And while there's no 4K output for games just yet, the Japanese giant is considering adding support for 4K still images and video to the console, as mentioned in its lengthy FAQ. Not that any of this is going to deter the hardcore gamers, anyway.

Update: The info we initially received from our Sony contact was not accurate. It turns out that the PS4 will also not support 3D Blu-ray at launch, and we've updated the headline to reflect this fact. Here is the latest official statement Sony sent us:

"Technically, the PS4 system supports 3D gameplay at launch on day one, though no launch titles are currently 3D compatible. 3D Blu-ray movies will not be compatible at launch."

In this article: 3d, 3dblu-ray, blu-ray, console, gaming, hdpostcross, microsoft, playstation4, ps4, sony, xboxone
All products recommended by Engadget are selected by our editorial team, independent of our parent company. Some of our stories include affiliate links. If you buy something through one of these links, we may earn an affiliate commission.