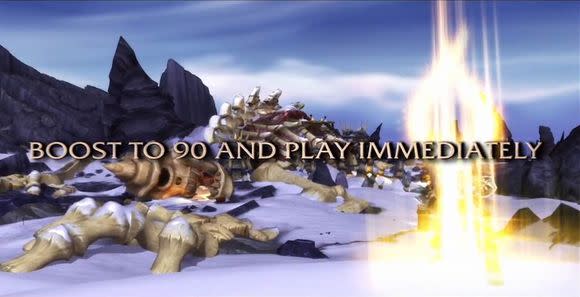 BlizzCon 2013 announced Warlords of Draenor and one of its highlighted features is the ability to instantly boost one of your characters to level 90 instantly. Though it is limited to one level 90 boost per Warlords of Draenor license, there is an interesting loophole, which I discussed in a previous post on this topic. To quote myself:

If players want to boost an additional 90, there's nothing stopping them from purchasing a new World of Warcraft box, Warlords of Draenor license, and a character transfer to move additional, instant level 90s to their primary account.

In an attempt to cut out the extraneous steps involved in that loophole, the Blizzard development team is considering simply allowing players to purchase extra boosts. Some like that idea. Some hate that idea. I'm one of those that does not hate it. I'd like to take a moment to explain why. First, I like the idea because I've done all of the leveling content multiple times already. If it will cost me a bit of cash to skip all of it, I'll be happy to pay the price. I don't have oodles of characters at Mists of Pandaria's max level, but I would like to have more of them than I currently do. The barrier standing in my way is the fact that to get a character to level 90, I need to spend many hours doing low level content that I've done countless times. I've only done Pandaria twice, which isn't so bad, but I've done Outland and Northrend more times than I can count. Even with Cataclysm's revamp of Azeroth, I never look forward to doing that content again.

The content isn't bad. Far from it. I've just done it before, and when my goal is to play with a new class in content that is at or near the level cap, I don't want to do all of those things I've already done. If you live by the time = money philosophy, then paying for an instant level 90 is equal to spending the time leveling to that point. Depending on how much value you put on your time, paying might actually cost less than investing the time. I would prefer investing my time in doing what I want to do rather than doing what I don't want to do anymore simply because it's a traditional part of the process. Again, I say this as someone who wishes they had more characters at level 90 right now, but I do not have them only because the leveling barrier is there.

I think it's also important to note that when this expansion launches, level 90 won't be the level cap anymore. This boost isn't a free ticket into endgame or raid content. It's a way to skip all of the old content that you have most likely already done before. There are, obviously, 10 levels between 90 and 100. There is time there for someone to learn how their class works. Players who boost a character to 90 will need to do all of the Warlords of Draenor content, just like someone who had a level 90 before the release of the expansion. Speaking of alts and being 90 at the release of Warlords of Draenor, consider that sometimes people do not want to play the same character from one expansion to the next. There are many reasons for that. You might be bored with your current character. You might not like some of the changes being made in the expansion. Having the ability to boost a character directly to 90 makes that a non-issue. Having the option to do it multiple times lets you elevate those low-level characters you really like rather than forcing yourself to play the 90 you had simply because it was the only 90 you had. My level 90s are a rogue and a paladin. If I want to play my level 80 warrior instead, if I don't have the boost, I'm forced to level through both Cataclysm and Mists of Pandaria before I can even touch the new content. With the boost, that isn't an issue. It becomes an issue again when I want to play my level 80 shaman. If I can resolve that issue at a reasonable cost, I will do that in an instant.

There has been an idea floating around that perhaps this boost feature should be limited to those who already have a level 90 character. Personally, I think that defeats one major reason the feature/option would be useful. New players to World of Warcraft face an ever-increasing barrier to entry. Even with the amount XP required to level reduced on a regular basis, a new player faces five expansions' worth of content that stands between them and Warlords of Draenor, the content which probably spurred them to pick up the game to begin with. They will languish in low level zones for a very long time and possibly quit before ever getting where they wanted to go. If they bought the game to play with friends who are already at level 90, those new players will be so far behind the curve that it may take a very long time to catch up, if they ever catch up before they quit.

Imagine this: you are new to World of Warcraft. You've picked up the game for the very first time with Warlords of Draenor. You saw all of the cool new features in the game's marketing and on the back of the box and were intrigued. You're also a fairly busy gamer, you only have a couple hours to play every few days. You start up the game, you're at level 1, and you ask someone when you get to start your garrison. Someone tells you that, with that much playtime per week and as a player that doesn't know the most efficient way to do things, you might get there in a month. A month. It's an MMO and things do take time in an MMO, but a month is a long time! That would be totally demoralizing to hear. You will probably stop playing altogether and never reach Draenor. Again, the boost takes you to Mists of Pandaria's level cap, not the level cap of the new expansion. Those new players will still have time to learn how to play the game. They will still need to do all of the Warlords content. Once they've done that, they have the option of experiencing prior content on a new character after they've experienced Warlords. If they like the game, they will probably do exactly that.

Some have called purchasing level 90s a "pay to win" system. What are you winning by jumping to level 90? The ability to do what you like. That's it. Jumping to level 90 won't give you an edge at level 100. Others feel that since they had to level from the beginning, everyone should. I can understand that sentiment. Really, I can. It's a natural feeling that we all get from time to time. I've even felt that way before! I said some of those exact things during some of the game's early changes to raiding. Over time, though, I realized that just because I did something one way doesn't mean everyone should do it that way. At my age, my grandfather didn't have a telephone. I have a smartphone that connects me to the entire world at all times.

The "journey" is very much a part of the MMO experience, but most of us were able to spread that journey across many years -- for some of us, across 9 years. That's a long trip to take for someone who has never seen Azeroth before. If we let them see the destination, it seems likely to me that after seeing it, they'll want to explore how the rest of us got there.
In this article: blizzcon-2013, level-90-boost, pay-to-win, rmt, warlords-of-draenor
All products recommended by Engadget are selected by our editorial team, independent of our parent company. Some of our stories include affiliate links. If you buy something through one of these links, we may earn an affiliate commission.