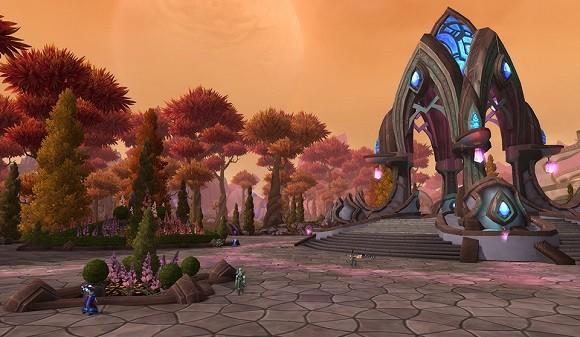 BlizzCon 2013 gave us a glimpse into WoW's future. As officers, it's never too early to plan and adjust for the evolution of the game. Let's take a look at the some of the issues that could affect your guild next year.

It appears that guilds will remain capped at level 25, which also means no new perks. In the systems panel, Blizzard said that they don't see the point of piling on perks. They said, "The system accomplished what we wanted it to accomplish."

That's good news, in a way, for smaller guilds or people who plan to start new guilds in the future. For those of us who hoped for more, it's a bit disappointing.

The announcement that hard mode raiding would be limited to strict 20-man raids came as a shock. If your guild currently raids hard modes in 10-man like mines does, you're going to have to make a big adjustment. Your guild model is no more.

Blizzard apologized for the change at least twice over the weekend. I appreciate that they feel bad about it. I also understand why they deemed it necessary, even if I don't really like the idea. Players can debate endlessly about which size was truly more difficult, but in the end we still had a choice. With four different difficulties of raiding, it seems strange to suddenly feel so limited.

Obviously I'll cover this much more in the future, since this is a very big deal.

Flex is the new normal

More welcome news is that the flex tech will be extended to LFR and to what is currently "normal" mode (or "heroic" in Warlords). This is great news for many raiding guilds who want a bigger challenge than flex offers in Siege of Orgrimmar. You will no longer have to leave friends behind at the instance portal. You can recruit freely, without worrying about bringing too many raiders on board.

It reminds me of the early days of WoW when you could run "5-man" dungeons with all the friends who wanted to go -- except now the bosses will scale instead of getting steamrolled.

More good news is that all raids except for "mythic" difficulty will be cross realm. In Warlords, players who couldn't afford to transfer or simply couldn't bear to leave their old guilds will be able to run current raiding content with guilds on other servers. And guilds who need extra raiders can draw from the greater WoW community, not just their own realm.

Blizzard is also hinting at an OpenRaid-style interface to facilitate this kind of cross realm activity. I sincerely hope they do!

If you're planning on hard mode raiding, however, you're stuck with the players on your own realm. Hopefully connected realms will be implemented across the board by the time the expansion goes live so that we all have larger pools of raiders to draw from.

Along with the long-anticipated item squish, Blizzard is redesigning the way armor works. Most armor pieces will look at your spec and adjust their primary stat to suit. The same piece of leather armor will have agility when a windwalker wears it and intellect when that player respecs as a mistweaver.

Smarter loot means less sharding, and more players who can roll on any given drop. It's certainly worth looking at your current loot system to see if it still makes sense when items can be worn by any class or spec of a given armor type.

If you currently raid flex, you'll need to implement a system for the next expansion. Loot will no longer be personal but master looted like current normal and heroic modes. Ghostcrawler did seem to mention at one point that you might have the option to set loot to the personal system. Until we see that toggle in action on a live realm, however, we can't be sure.

This new system should also reduce the amount of offspec gear that a player needs, making it far easier for players to assume multiple roles in a raid. Sure, the secondary stats will probably not be optimized for both specs, so progression raiders will still likely need to have two sets of gear for most slots. Other slots, like trinkets and weapons, won't adjust at all.

Blizzard claims that you won't be able to game the flex system by shooting for a "breaking point." The bosses won't drop one extra item because you brought exactly the minimum amount of players for that third item, for example.

Blizzard also announced a new world PvP zone called Ashran. With multiple objectives and destructible buildings, it seems like Ashran will be a mix of Wintergrasp and the original Alterac Valley. As fan of the classic AV, this is the first time in many years that I'm excited about WoW PvP.

For PvP guilds, Ashran could be a huge part of your guild's weekly activities. Ask members in the beta to test out the zone so you'll have a tactical leg up once it goes live.

For other guilds, Ashran may be fun enough to attract players who don't normally PvP. It might be worth scheduling Ashran nights where your guild can hit the zone together as a team. Now that players have innate resilience, your members won't need to gear up specifically for PvP to compete.

While garrisons are a solo affair, it will make sense for some guilds to optimize what each person chooses. Garrisons can produce raw materials. Diversity of choice within the guild could boost your ability to craft items and consumables.

Some buildings even offer 4-hour stat bonuses that don't vanish on death, if the screenshot above is true. This is perfect for raids. Progression raiders will want to plan ahead and decide which structures offer the best raiding bonuses. Isn't that right, Mr. Hat?

Even better, Blizzard said that if garrisons are successful, they might look to expand them to guild housing. There are at least five reasons why they should.

Warlords of Draenor will provide many opportunities for great guilds to shine and attract players. What's your plan?

Officers' Quarters keeps your guild leadership on track to cope with sticky situations such as members turned poachers or the return of an ex-guild leader and looking forward to what guilds need in Mists of Pandaria. Send your own guild-related questions and suggestions to scott@wowinsider.com.
In this article: building-guilds, featured, flex-raiding, garrisons, guide, guide-to-officers, guild-advice, guild-leadership, Guild-Levels, guild-management, guild-officers, guild-perks, guilds-guide, leadership, leadership-advice, loot, mythic-raiding, officers-quarters, raiding, warlords-of-draenor, wow-guide, wow-guild-management, wow-guilds, wow-leadership
All products recommended by Engadget are selected by our editorial team, independent of our parent company. Some of our stories include affiliate links. If you buy something through one of these links, we may earn an affiliate commission.