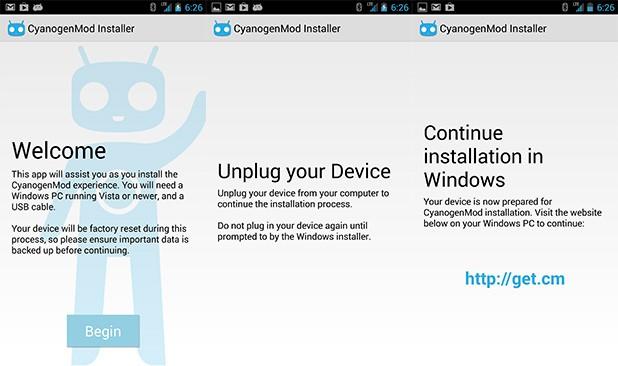 Making CyanogenMod the third major mobile ecosystem is a lofty goal, but the minds behind the custom Android ROM have just made it easier for smartphone users to join their ranks. Rather than installing the operating system by hand, folks can now rely on the freshly-released CyanogenMod Installer app -- which just arrived on the Play Store -- to do the heavy lifting. A smartphone wielding the application can score the latest version of CyanogenMod by being hooked up to a windows PC (with Windows Vista or newer) running the companion desktop software. The majority of current flagship devices are supported by the setup, and the devs say they're working on adding more models to the list. Head to the source links below if you're ready to embrace this outsider operating system, just be sure to back up your handset's data beforehand.

In this article: Android, app, CustomRom, CyanogenMod, CyanogenModInstaller, mobilepostcross, ROM, smartphones
All products recommended by Engadget are selected by our editorial team, independent of our parent company. Some of our stories include affiliate links. If you buy something through one of these links, we may earn an affiliate commission.