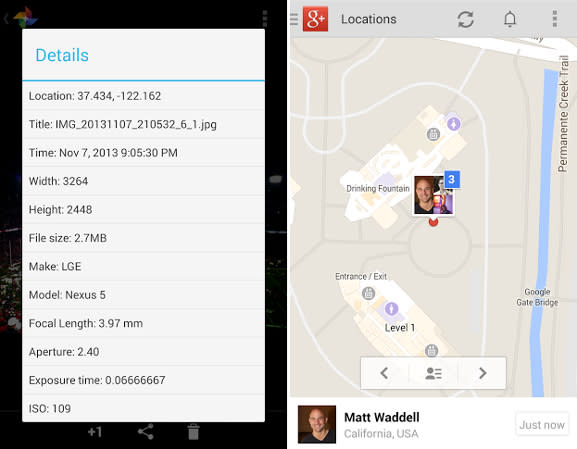 The Google+ app for Android is getting a small version bump starting today, and while most of the changelog is filled with bug fixes, there are a few new features worth getting excited about. For one, when you fire up Locations, it will automatically update your friends locations. It's a nice touch, and one that honestly should have been there from day one... but we digress. The rest of the changes apply to the photos portion of the app, which we all know got a serious boost a few weeks ago. Now Google is adding Android Beam support for sharing photos over NFC, and integrating photos with its Daydream screensaver feature. And, if you're looking for nitty gritty details about your photos' focal length, file size, exposure time and all that good stuff, you'll find it under a new drop down menu on each individual picture.

On the web, anyone using Google+ from their desktop will notice a new design rolling out on profiles starting today. Now, cover photos are expanded across the top of the page, with the user's profile details on the left side, laid over a blurred segment of the pic. The Android app is rolling out slowly so you may not see it on the Play Store immediately, but the profile tweaks should be visible right away.

In this article: android, coverphoto, google, googleplus, locationsharing, mobilepostcross, photos, profile, update
All products recommended by Engadget are selected by our editorial team, independent of our parent company. Some of our stories include affiliate links. If you buy something through one of these links, we may earn an affiliate commission.