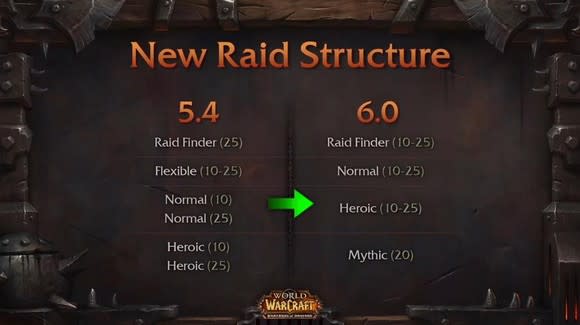 Mythic raiding in Warlords of Draenor won't be the first time we've seen this particular raid size. Both vanilla Zul'Gurub and Ruins of Ahn'Qiraj were 20-man raids. It also won't be the first time guilds were fractured by raid size changes, such as the vanilla to BC transition. Heroic raiders in both 10-man and 25-man guilds are wondering why neither of them was chosen to be the official raid size going forward. Why do both raid sizes need to have their teams disrupted?

Community Manager Lore chimed in on the forums to explain why Blizzard chose 20 as the magic number. Essentially, the problem with the 10-man raid size is they can't reasonably guarantee you will have a specific class to handle a unique mechanic. This isn't a problem in 25-man, but when you are trying to make both raid sizes equal in difficulty you cannot design mechanics which only work in 25-man.

Lore
Seeing a lot of debate about the number 20. Let me take a stab at clearing up a few things:

We chose to put Mythic at 20 largely for the function of raid design. One of the biggest issues we're currently facing with 10-player Heroic raiding is that of raid composition. It's impossible for every group to have every class, and often that means they're lacking in certain tools, which in turn means that we can't design encounters around those tools (or if we do, it becomes extremely frustrating for the 10-player Heroic guild that suddenly needs a Paladin for Hand of Protection).

We want to be able to use those sorts of mechanics again. Those of you who have been with us for a while might remember things like Mage tanks on High King Maulgar, or Priests using Mind Control on Instructor Razuvious. We want it to be okay when, say, the Paladin can use Hand of Protection to clear a dangerous debuff, because we can reasonably assume that most guilds will have at least one Paladin in their raid. We like it when someone gets to feel awesome and have a special task on a fight because of class abilities that otherwise wouldn't get much use.

We can't do that when we're designing with a 10-player raid size in mind. We don't think we'd be able to get away with it at 15 either. At 20, it becomes a lot more acceptable for us to say "you should probably bring a Mage to Spellsteal this." And honestly, that's just one example of the sort of encounter mechanics we can start to utilize in a larger group size.

I'd also call into question the statement of "It's easier to drop people than it is to recruit them." It's technically true, yes -- finding new raiders is harder than just not inviting the ones you have -- but totally ignores the fact that cutting people from your roster often means losing people you like. Which feels better: making new friends, or telling your current ones that they don't get to play with you any more? We're already asking a lot of many 25-player Heroic groups to cut 5 people.

As I mentioned before, this was not a decision we came to lightly. It's definitely going to be a very scary transition for a lot of people. We knew that when we made the decision. We just also feel quite strongly that, when the dust settles, we'll be able to provide a better raiding experience for everyone.
source
So, why not stay at 25-man only? It's very slightly easier for a 10-man guild (who are the majority of the raiding population) to transition to the new size, and 20 people is about as low as you can go to make sure you will have a specific class present for a mythic-only mechanic. Some people are of the opinion that 15-man would have been a better compromise, but Blizzard thought it would be too small of a size in order to guarantee at least one of every class.

@grizzlebees @ArcaneTactics We understand it's a major imposition for affected guilds and we are sorry. We still think it's the best design.

Ultimately, Blizzard feels this will be a benefit to high-end raiding in the long run. How is your heroic raiding guild handling this news?
In this article: 20-man-raid, blizzcon-2013, heroic-raiding, mythic, mythic-raiding, warlords-of-draenor, warlords-of-draenor-raiding
All products recommended by Engadget are selected by our editorial team, independent of our parent company. Some of our stories include affiliate links. If you buy something through one of these links, we may earn an affiliate commission.